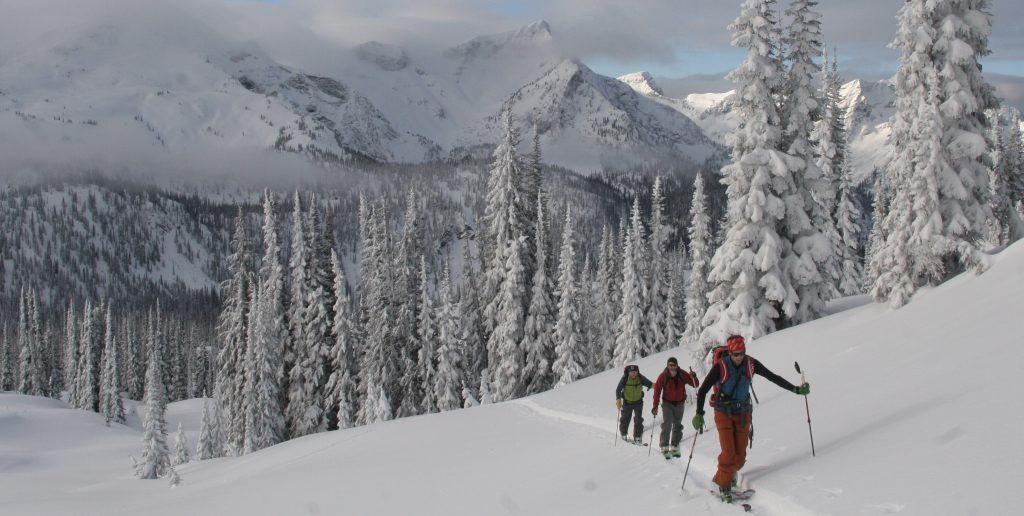 Competition breeds innovation. And as Marker, G3 and Fritschi commit to the tech binding market, Dynafit continues to refine and evolve their binding line-up to keep pace with market demand. Dynafit’s impressive binding offering features more than 10 models ranging from the ultra-light race DNA to the modestly minimalist Speed Radical and the burly pro-freeride edition–the Beast. But it’s the Dynafit Radical 2.0 that sits in the middle with the broadest appeal. The Dynafit Radical 2.0 represents a significant evolution from the humble simplicity of the early TLT tech binding, and it now replaces the Radical ST / FT that has dominated the line, and arguably the marketplace, for the last few seasons. 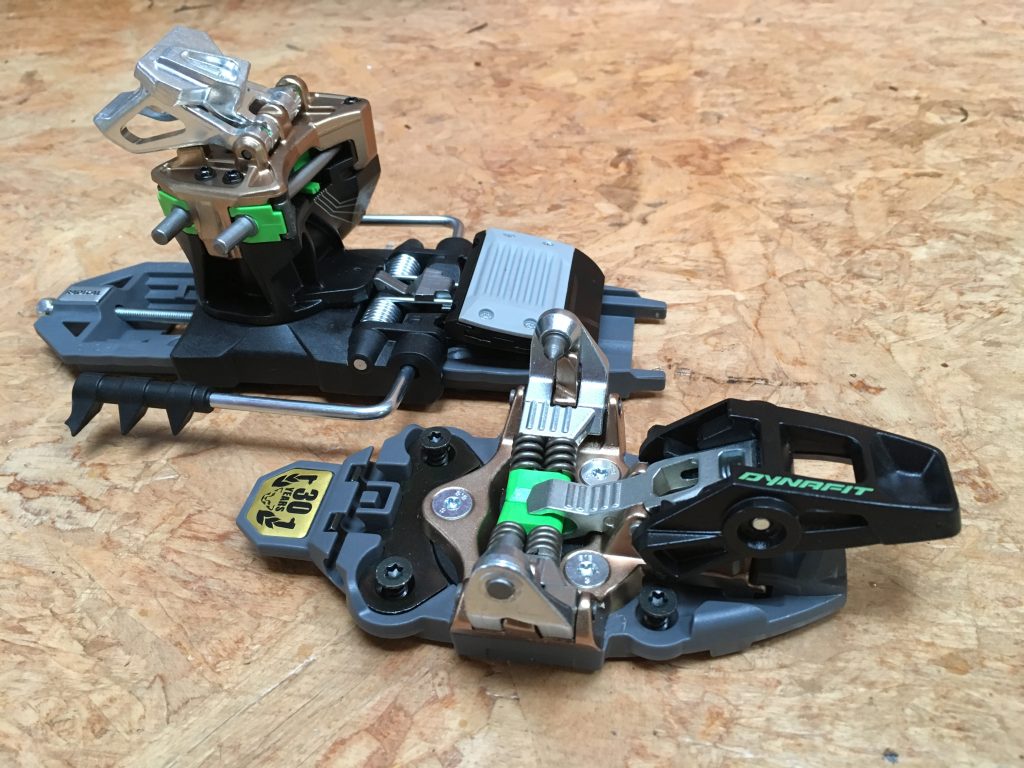 What does the Dynafit Radical 2.0 bring to the table? Well, it offers a blend of tried-and-true Dynafit tech binding technology plus new innovations that promote improved safety through more consistent release. The improved safety is rooted in new elasticity that is designed into the system. There are two major features that push the release safety agenda: a pivoting toe piece and spring-tensioned heel elasticity. The idea is that these two features work together to improve the binding’s ability to absorb shock and impact, so releasability is more consistent and inline with the dynamics that alpine bindings offer. Think of the Radical 2.0 as where the feel and function of the lightweight tech binding meets better control and safety–i.e. better release performance and less vibration transfer.

I’m not an engineer or a binding release specialist, so I’ll take the Dynafit engineering to function as advertised. The binding did in fact receive a level of release certification–referred to as TÜV to DIN / ISO 13992 when matched with Dynafit branded boot inserts (read details from Dynafit at the link). The topic is worthy of a much more in-depth discussion, but suffice it to say that DIN / ISO 13992 certification is specific to alpine touring gear and is not the same as the DIN/ISO certification found on an alpine binding. But it’s a step forward in safety. The Marker Kingpin and Fritschi Vipec have also received this same level of certification. Personally, I’ve never had any major issues with older Dynafit models, but I understand how the new system is more dynamic and how the new elasticity should lead to better release consistency and, hopefully, release performance that more closely resembles a traditional alpine binding. So, I applaud Dynafit, Marker and Fritschi for working toward better safety performance. 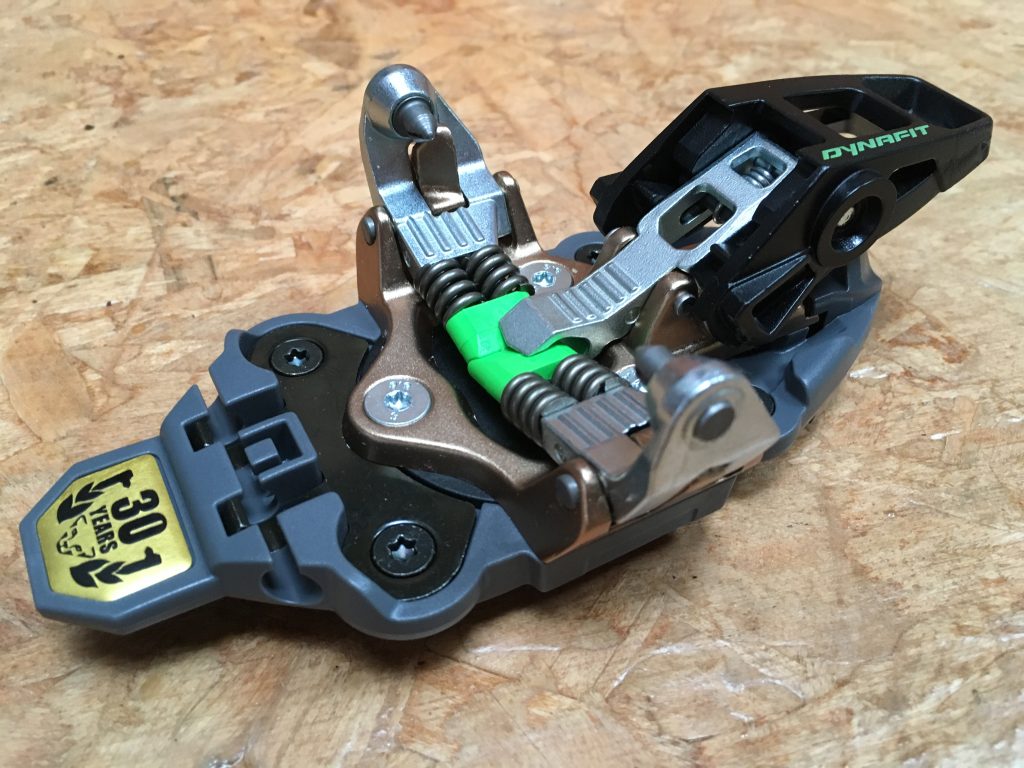 The most noticeable physical change in the Radical 2.0 is the pivoting toe piece. The whole toe unit now pivots laterally 5 mm left and right of center. The dynamic adds elasticity to the retention system that is designed to improve release value consistency. There is no noticeable downside while skiing. In fact, there are skiers who suggest that the new dynamics help reduce the vibration transmission of the binding. Those skiers must not be skiing powder . . . anyway, the bottom line is that it skis well. The change that requires getting used to – at least for seasoned tech binding users – is that the pivoting toe piece changes the step-in dynamic. In other words, the toe can pivot as you try to step in and it takes a little practice to learn to deal with the movement. It’s a minor annoyance, but still takes getting used to. The pivoting locks to center once the toe is locked into walk mode. 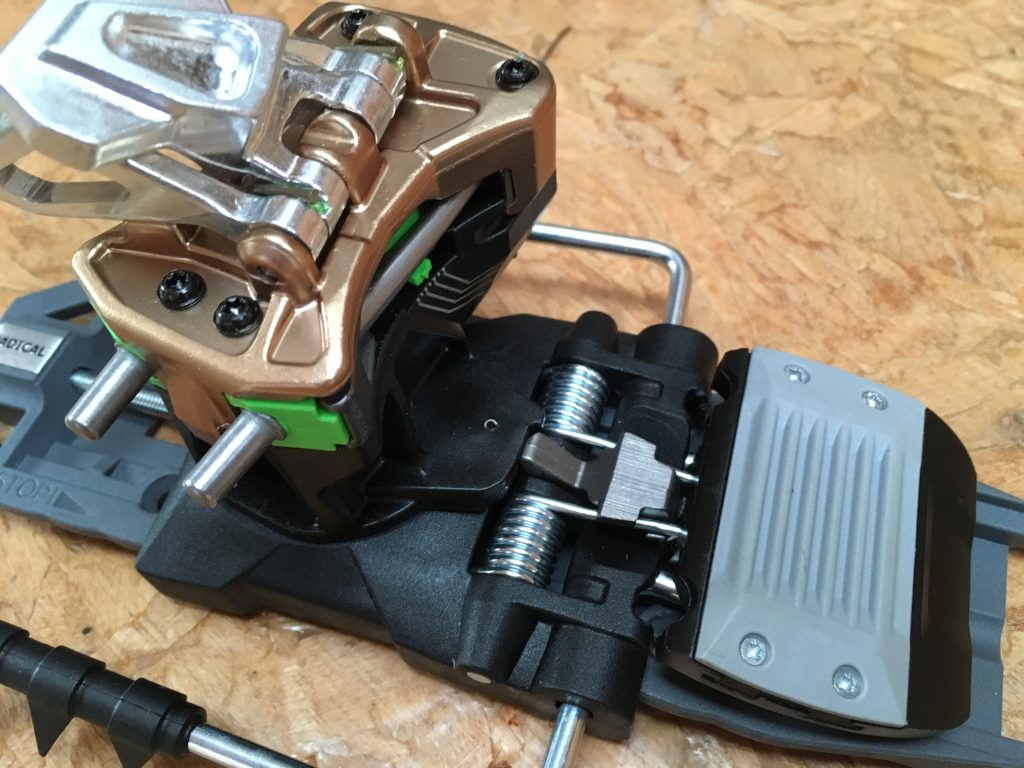 The changes to the heel unit may appear cosmetic to those unfamiliar with earlier Dynafit heel units, but there have been several significant innovations, specifically the heel unit now features spring-loaded forward tension and a corresponding 10 mm of elasticity to accommodate ski flex — something that was only marginally addressed by earlier models with a modest 4 mm heel gap. The new heel unit is adjusted to the boot without a gap and can move up to 10 mm while maintaining forward pressure to keep heel pins secure – much like the G3 ION.  The forward pressure works with the pivoting toe to improve binding retention and release value consistency.

Additional changes, most notable to long-time Dynafit users, include that you no longer have to compress the brake by hand and then turn the heel. The new brake locking mechanism allows you to step down onto the brake to lock it after having turned the heel to climb mode. Related to the brake mechanism comes the return of two-directional heel rotation. The heel turns clockwise for touring and returns to ski mode with a quarter turn counter-clockwise. The new brake lock mechanism worked well for me and the ability to turn the heel counterclockwise helps facilitate ripping skins and returning to ski mode without removing your skis–just like older Dynafit bindings allowed (users of the Radical 1.0 binding will note that there was an added turn stop making this move difficult unless you physically removed the stop). Time will tell how well the brake locking mechanism holds up, but so far so good. Overall, the heel unit is also beefier in the name of added durability. 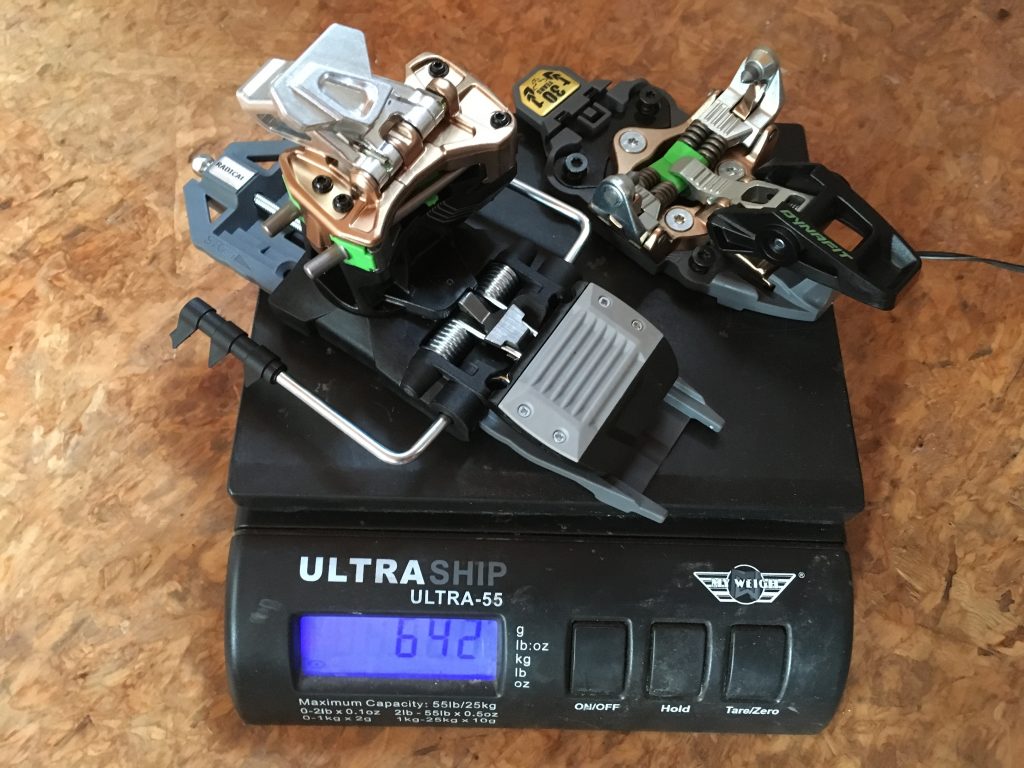 Basically, the Dynafit Radical 2.0 offers the same known features and feel of the proven Radical with a safer, more reliable release. It skis well and some suggest even better than the Radical due to less vibration transfer. What’s not to like? The con list is short and based upon minor criticism probably most meaningful to longtime Dynafit users versus those new to tech bindings.

The real downside for long-time Dynafit skiers is simply weight. As the binding’s features list grows, so does its weight. The Radical 2.0 ST weighs in at about 1.28 kg a pair, approximately 200 grams (almost half a pound, 7 oz) more than the Radical. What’s 200 grams for improved safety, right? It is a small price to pay, but the light-is-right skier will counter that we’ve incurred added weight with every new edition of the binding, so for early adopters of tech, the weight is significant. And there is truth in this, but that’s why Dynafit keeps the Speed Radical among others in the line — you get  the benefit of the original Radical toe piece innovations while keeping the system simple and light with a basic heel unit. Skiers new to tech bindings will find a lot to like in the Dynafit Radical 2.0.

There are two versions of the Dynafit Radical 2.0; the ST and the FT. The ST offers release values of 4-10, while the FT is rated 5-12. The FT adds aluminum “power plates” to increase binding rigidity, hence stouter release values. The FT also adds approximately 60 grams to the pair – as per spec relative to ST model.

Here’s a video from Dynafit walking through the Radical 2.0 features.