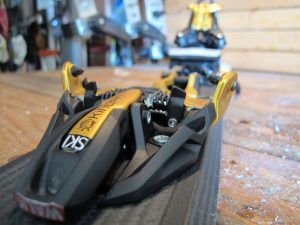 2015 has been the year of the tech binding. The G3 ION, the Fritschi Vipec and the Marker Kingpin have all hit the market.

Marker is the first big player to offer a significantly new take on the traditional pin-tech style heel attachment. The Marker Kingpin is essentially a hybrid binding featuring a tech toe and an alpine heel connection. The Kingpin’s alpine-style heel addresses one of the criticisms of tech bindings, power transfer. 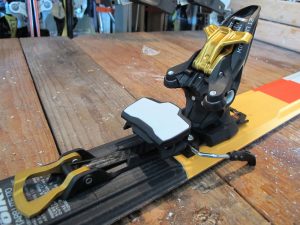 Alpine-style binding devotees have long criticized tech binding heels for their lack of power transfer due to the fact that the connection to the heel is so close to the center of the boot heel, essentially limiting how much power your boot has against the ski. Granted, for the bulk of us mere mortal backcountry skiers, the lack of power is not that big a deal while skiing, hopefully, powder snow. Nonetheless, the physics behind the criticism stand, and the Kingpin’s heel offers great power transfer – owed in part to its heel unit but also its wide (38mm) mounting pattern for both toe and heel units. 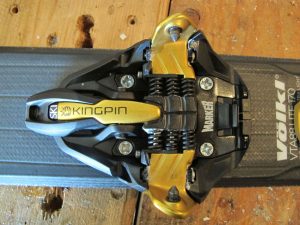 On top of the new approach to the heel unit, Marker is the first to add DIN/ISO 13992:2007 certification from Germany’s prestigious TÜV testing organization for a tech-style binding. The binding is available in DIN 6-13 and 5-10 models. The other tech bindings on the market only offer a relative release value, not a certified DIN/ISO value. Other features of the Kingping include six springs in the toe piece (versus four on others), wider mount as mentioned and adjustable boot stop position should your boot’s toe standard vary from the norm.

I’ve finally been able to get out and tour on the Kingpin and have to say it works great. It’s easy for the average gram-counting backcountry skier to look at the Kingpin and see “heavy.” In reality, it’s not as heavy as it looks. The binding weighs in at 750 grams per binding on our scale, 150 grams / 5.3 ounces heavier than a Radical ST. So, all told, a pair of Marker Kingpins weighs 300 grams or close to 3/4 of a pound more than a pair of Dynafit Radical ST’s. The Marker Kingpin is not going to turn the heads of serious gram counters or rando-racers but, for many users or those who really feel they are in need of more power transfer, the fact that the Kingpin offers certified DIN release values will certainly tip the scale in its favor. 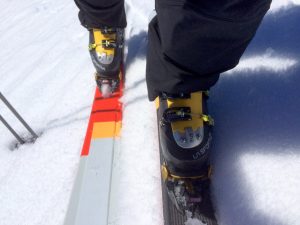 Touring with the Kingpin was straight forward with no surprises. Marker appears to have solved some early production issues with the toe pins and the binding worked flawlessly for our test period. Like the other Marker frame style touring bindings, the Kingpin switches between tour and ski modes by shifting the heel unit back or forward with a lever located under the foot. This means that switching modes requires removing the ski; a minor annoyance for those who prefer not to remove skis when ripping skins.

I knew the Kingpin would ski well, but I was pleasantly surprised by how light it actually feels on the uptrack, too. The heel unit has the beefy appearance of an alpine binding, but Marker successfully reduced its weight to a reasonable scale. I found the binding smooth and functional on all levels. Whether you make your next binding purchase a Kingpin, ION, Radical 2.0 or Vipec comes down to user preferences. Having now skied them all, I can see the merits of each one. It’s time to weigh your options, preferences and primary use. Obviously, the dedicated light-is-right crowd is going to stick with one of Dynafits’ lightweight (and stripped down) models. Those with a resort bias will be tempted by the Marker Kingpin. It’s those of us in between that have hardest choice, but it’s nice to see the options and the technology progressing.