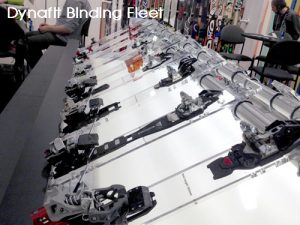 A second area of growth and innovation of note at the trade show this year was in alpine touring tech bindings – the AT binding originally designed and popularized by Dynafit and noted for its lightweight, efficient design. The Dynafit design concept is now thirty years old and, a handful of years ago, the patent was allowed to expire. Ever since, new players and innovation have been driving the binding forward. Well, it’s clear this year that tech bindings have some serious momentum in the backcountry ski world. Dynafit maybe the “Kleenex” of tech binders, but Black Diamond debuted the new Fritschi Vipec 12 and G3 their new ION tech binding. Both bindings appear to be solid designs with wide appeal. 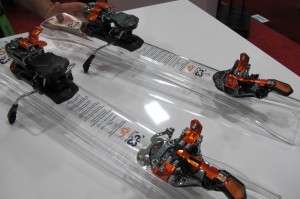 Following the questionable success of their Onyx tech binding, G3 went back to the drawing board to create the new ION tech binding. It’s appearance is more inline with that of the Dynafit, in fact, some aspects are quite similar. G3, however, adds numerous subtle features and innovations that help the ION stand on its own. Perhaps the most remarkable, given our short tour of the binding, is the heel unit. Though it looks familiar, it includes a unique dynamic tension (fore and aft) that is designed to maintain a fixed position for the heel pins during normal ski flex. The Vipec 12 has a similar feature. The ION also moves to a spinning heel, like that of the Dynafit, to switch between modes. The bottom line is G3 is trying to limit the movement of the pins in the boot heel to further improve binding retention and variability in release. Like all tech bindings at this point in the game, the ION is not yet DIN certified. Word is that the DIN world is in process reviewing the ION as well as the Vipec and various Dynafit models. It appears that, in the not too distant future, there will be a DIN cert for tech bindings. The brake system looks beefy and the brake self locks as you step into the binding, regardless of tour or ski mode,; a nice feature. The ION is a clean and easy to use binding. It has a sweet crampon attachment system that appears to allow much simpler attaching and removal of a ski crampon than the other systems. 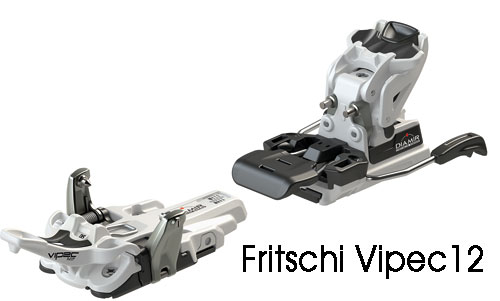 The new Fritschi Vipec 12 is the other strong new player in the AT binding market. Fritschi took the established tech norm and focused on improving the reliability and continuity of the release mechanisms. The toe is the only tech binding to offer release adjustment  (Trab actually has a binding with toe adjustment, but it’s a whole new beast and I’ll wait for that evolve). The Vipec also features a heel unit that slides fore and aft to switch between ski and tour modes – much like the G3’s original Onyx binding. Lou Dawson over at Wildsnow.com has loads of info on the new Vipec if you would like to read more specifics. In the big picture, it looks like a nice viable binding. It also happens to available to consumers now in limited numbers.

Not to be outdone by the competition, Dynafit debuted five new tech binding models including the Radical ST 2.0 featuring a new pivoting toe platform to improve the bindings overall retention elasticity. In addition, the 2.0 has a beefed up heel plate and lifters plus a new brake with updated locking mechanism. Among the other new bindings in the Dynafit line, which now features 11 models, are the Beast 14 and a crazy carbon fiber racing model. The price of the Beast comes down from its lofty 1k this season to something like eight hundred and is available in 14 and 16 DIN varieties. Of more interest to most of us though, is the new Radical ST 2.0 and the Radical ST, which carries forward to next season.

As mentioned the new 2.0 version features a pivoting toe. Basically, the toe can rotate  five degrees left or right to improve the overall elasticity of the binding. In other words, it’s not all or nothing for retention, the binding is theoretically more dynamic. The design adds a little weight to the system. Another addition is the Speed Turn, essentially a basic TLT from a few years back, and the Speed Radical remains in the line, too.

We should be getting the various new bindings in for testing as spring nears, and I’ll keep you posted on how it goes.

Shop for deals on AT bindings

More deals on AT bindings

More deals on AT bindings