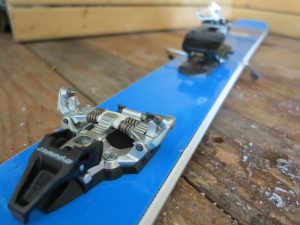 The proliferation of new tech bindings this past season is proof that the system has gained mainstream appeal. Of course, all the new options are sure to put pressure on Dynafit, the originator of the tech-binding concept. The Dynafit Radical binding is arguably the most widely used tech binding on the market.

The Dynafit Radical Binding comes in several variations; the Speed Radical, the Radical ST and the Radical FT. All of these versions have the same toe unit (a great upgrade form earlier TLT/Vertical models), but offer variations on the heel. All of the models offer a release value settings (4-10 or 5-12), but they are not DIN certified values, simply approximations thereof. Probably the most widely used of the group is the Radical ST. It is the binding I have been using for the bulk of my skiing for several years. Based on my familiarity with the Dynafit Radical ST, it’s also the binding to which I compare everything else.  It’s not perfect, but it has proven to be very reliable and I am familiar with its small quirks. 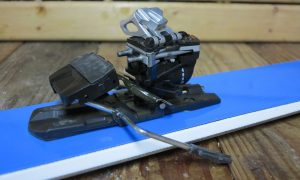 The Speed Radical is the choice of those looking for the lightest tech binder that still offers the convenience of the step-in toe design and easy-flip heel lifts. Personally, I like to have a brake on my ski for most applications, so I accept the added weight of the ST model. It also offers more fore aft adjustment for use with different boots. The FT is for those who prefer a release value setting above 10. 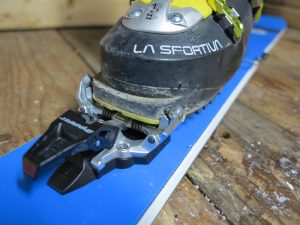 The original Dynafit TLT binding was a bare-bones product that got the job done. Each new version of the binding since has added small levels of convenience and durability, but the Radical still functions on the same principles of the original TLT. What the Dynafit Radical binding adds is a great step-in toe design – check out the video of how easy it is to step into the Radical toe – better heel lifter use, a brake that works and all-around durability upgrades including a much improved ski crampon slot.

The Radical also introduced the idea of the heel unit turning only clockwise. This is accomplished with a small plastic stop that can be seen on the brake (though not in these pictures). The idea is to eliminate the auto-rotating heel experience which occasionally occurs in tour mode  – especially in wet snow and with heavier skiers. The new stop works, but it also, in my opinion, changes the flow of transitions because turning the heel now requires reaching down. It’s a small complaint and likely only means something to those of us familiar with earlier versions who have developed the pole flip move to turn the heels back to ski mode. I solve the issue by removing the plastic stop, but I’m sure the Dynafit lawyers would not recommend this option . . . 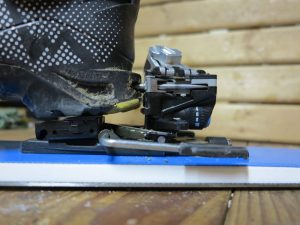 With numerous seasons on the Dynafit Radical Binding in all conditions and with numerous different boots and skis, I can confidently say it works great. The biggest criticisms revolve around the elasticity of the heel unit and its relationship to potential unwanted release and the occasional icing under the toe, but I can honestly say these have never been big issues for me. Part of the reason for this is that I am a seasoned veteran of the TLT binding, knowing it’s small quirks well. The other reason is that I am not launching big or skiing lines akin to those found in a TGR film. I am a skilled skier with a couple decades of experience and the Dynafit Radical binding treats me well. I have had it release when it should and otherwise it handles the varied demands of touring and ski mountaineering quite well.

There is no question that the new bindings on the market- the Vipec, ION and Kingpin – are taking tech binding technology to the next level. They are building in better system elasticity – which improves release consistency, DIN/ISO certification and small refinements that definitely make a difference. Nonetheless, the Dynafit Radical binding gets the job done and reliably. Of course, Dynafit has changes in the works, too. The Radical 2.0 addresses elasticity in the system without evolving too far from the original Radical design. Of course, the more complex the system becomes, the heavier it seems to get. The Radical ST binding offers a nice blend of reliability and functionality with an easy to handle weight. 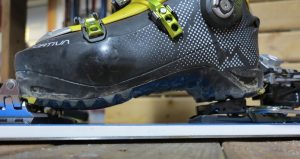