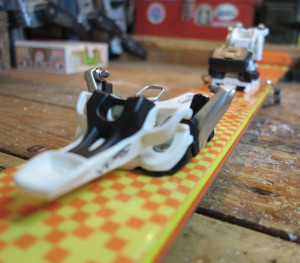 The Fritschi Vipec 12, having weathered a few initial glitches last season, hit the market in 2015 refined and I’ve spent the past couple months logging hours on the current model in the backcountry and at the ski resort. The bottom line is that Fritschi has set themselves up as a viable player in the tech-binding market and the Vipec offers several unique characteristics that are likely to help push tech-binding design into the future.

First, the basics; the Fritschi Vipec 12 is compatible with all tech-compatible boots. Like Dynafit bindings or the G3 ION, the Vipec offers a release value, but it not a DIN certified release. What really sets the Fritschi Vipec 12 apart from the competition are features that address evolving release technology in tech-bindings.

ON PAPER – WHAT’S DIFFERENT ABOUT THE VIPEC 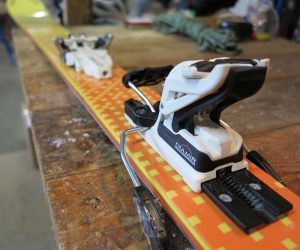 The first design feature that distinguishes the Vipec is what Fritschi refers to as a “gliding heel piece” that allows for active compensation of ski flex. In other words, the heel piece is dynamic and moves fore and aft to allow for consistent contact pressure with the boot. It’s much like the G3 ION heel unit in this way. The idea being that the heel stays in contact with the boot while the ski flexes to maintain a consistent release value. It’s a feature that is also coming on the Dynafit Radical 2.0 (Fall 15).

The second unique feature of the Frtischi Vipec 12 is in the toe unit. The toe provides adjustable value lateral release. This gives the toe a degree of elasticity, more like an alpine binding, and appeals to aggressive skiers and those who want a binding to use at the resort as well as touring. The way it works is the toe jaws actually provide play left and right and you set the release value for the play. A lateral release of the toe actually results in one toe wing folding open and releasing the boot. The more static toe of a Dynafit or G3 requires heel movement to disengage at the toe. 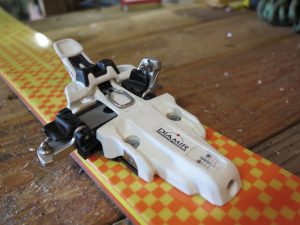 A third significant difference in the Frtischi Vipec 12 is in how the binding transitions from ski to tour modes. The Vipec heel unit slides backward to enter tour mode, versus rotating like the Dynafit or G3 ION. The advantage here is on-the-fly change from ski to tour. Of course, I might argue it’s a rare need. Nonetheless; it’s makes for easy transitions to tour mode whether you do it on the fly or not. Personally, I’d be more impressed if it was easier to switch from tour to ski – a move I prefer to do without removing my skis – but it’s easy enough that I have no complaints. More importantly in my mind, the sliding heel unit eliminate heel spin – a problem known to plague Dynafit and G3 where the heel unit auto rotates back to ski mode while skinning. Bottomline, the heel unit functions well and is different from the G3 and Dynafit models.

Finally, a couple of subtle but still important differences in the Vipec. One is the mounting pattern. Fritschi offers yet another mounting pattern that is wider and designed to match today’s big skis.  Second is ramp angle. The toe unit is raised to reduce ramp angle to about a 5mm. Though ramp angle is a debate all it’s own, most skiers will agree less is more. 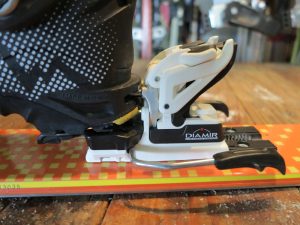 ON SNOW – USING THE VIPEC
When it comes to downhill performance, the Fritschi Vipec holds its own and offers a positive transfer of power. I’ve heard skiers talk about the improved feel due to the elasticity of the toe versus the harsher feel of a non-dynamic toe found on other tech binders, but I must say such talk is mostly lost on me as I spend the bulk of my time in soft snow where I really doubt anyone is feeling the elasticity (or lack thereof) of the toe. They skied great and walked up the hill just like you’d expect from a tech binding.

As a longtime Dynafit user, I must admit that I find the Vipec toe somewhat fussy to step into. It’s a combination of small details, but I believe the problem boils down to the interaction of my boot sole (a La Sportiva Spectre) and the metal wire guide on the Vipec toe unit. The wire seems to hang my boot up short of where it needs to be to step in easily. That said, stepping in is not really hard, it’s just not a no-brainer for me like stepping into the Dynafit Radical. The most effective solution for me has been to set the heel in line with the heel pins and then step down with the toe. Doing this sets the toes down at the correct position to accept the toe pins.

Tour mode functions much like the other tech models. I found I needed to keep the toe locked in walk mode for skinning, otherwise I could kick the binding off while making a kick turn. Transitions are relatively easy and the sliding heel unit is easily moved into walk mode with your ski pole. A concern I have heard discussed by others is an issue with the heel unit icing enough to affect the walk/ski transitions. Though I have only had it happen once, it appears that snow (especially in wet conditions) can build up under the heel unit, thus keeping the heel from locking into ski or walk mode. I couple quick transitions from walk to ski solved the issue for me – kind of like clearing ice build-up on a Dynafit toe.

CONCLUSION
The primary reasons to use tech bindings are the freedom of the walk mode and reduced uphill weight over frame bindings. The most common reasons I hear that people don’t ski tech bindings is they are fiddly, don’t offer reliable DIN or retention and they don’t offer the power transfer of an alpine-style binding. Fritschi is doing its part to address these issues. The Vipec offers a new level of dynamic release and though not DIN certified, it’s a step toward the more dynamic nature of alpine binding release. As for the fiddly aspect, the Vipec heel is simple and easy to use but the toe may remain fiddly for new users until you’ve had a little practice. Though a touch heavier than the Dynafit Radical ST, the Vipec is competitive at 630 grams/each (1.26 kg/pair) (with brakes) compared with 575 grams/each (1.15 kg) for the Radical with brakes.