High Pressure and bluebird conditions prevail and the views stretch as far as my eyes can see in all directions. Dozens of stunning, rocky peaks dressed in white vie for my attention. I wander the ridge toward the summit of a small peak near the Scott Duncan Hut and contemplate the surroundings. To the west are the Yoho Valley and the President Range and to the east, the Bow River Valley and the peaks of the Banff area. The number of mountains is mind-bending and the scale of the mountaineering available is unmatched in North America. I am wrapping up the classic multi-day ski tour known as the Wapta Traverse in the heart of the Canadian Rockies, a range of mountains with a rich legacy of ski mountaineering.

The Wapta Traverse runs generally north-south along the Continental Divide not far from Lake Louise, Alberta. First explored on skis as early as 1932, the Wapta Icefields region offers gradual sweeping glaciers and quickly became known for its ski mountaineering potential.

Ski mountaineering pioneers such as A. A. McCoubrey, the Neave brothers, Campbell Secord and Victor Kutschera were some of the first to explore the region on skis. Taking off for multi-day adventures in the spring, these early explorers of the area climbed and skied a vast amount of terrain around the Yoho Valley and the Wapta Icefields. To repeat some of the early ski mountaineers’ adventures, even with today’s modern gear, would be an adventure; to do so with the equipment of their time would be a true challenge. As noted in Chic Scott’s Powder Pioneers, McCubrey describes a Wapta experience:

For 3,000 feet, skis and skiers careened down the snowfield, throwing caution to the winds and once in a while the odd ski cap or ski poles. Bob had left five minutes before me in breathtaking fashion, skiing diagonally across the snowfield, crouched low, and enjoying to the full the joy of speeding through such surroundings.

The terrain around the Wapta Icefields lends itself to exploration and peak bagging. Expansive low-angle glaciers and snowfields lead to a wide variety of noteworthy peaks, including Mounts Olive, Gordon, Rhondda, Saint Nicholas, Balfour and Daly, all hovering in the neighborhood of 10,000 feet. 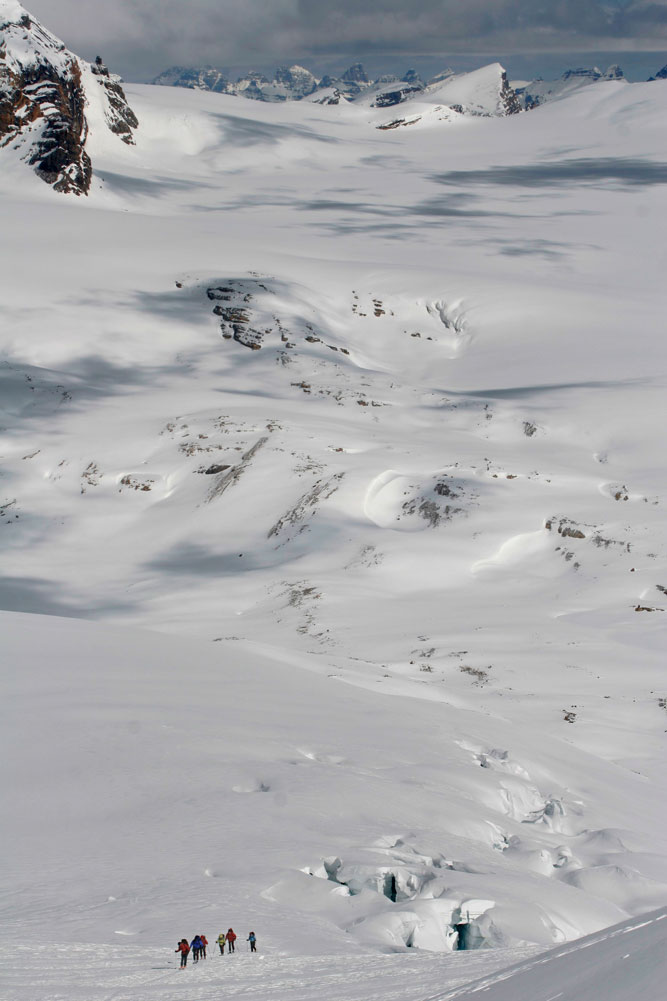 The meltwaters from the Wapta feed four river systems: the Bow and the Mistaya on the Atlantic slope and the Yoho and the Blaeberry on the Pacific slope. The Wapta area straddles Alberta’s Banff National Park to the east and British Columbia’s Yoho National Park to the west. Mt. Balfour, at 10,735 feet (3,272 meters), is the highest peak in the Wapta. The weather is famous for cutting short ambitions in the area. The same low- angle, easy-to-negotiate snowfields that make access possible are notoriously difficult to navigate in whiteout conditions.

Although we have planned for them, whiteout conditions are trumped by the need for sunscreen on this trip. It is April and our group enjoys each day to its fullest in the alpine terrain. Firm, cold snow makes for easy travel as we ascend the long moderate ridge of Mount Rhondda. We are rewarded by boot-top-deep soft snow on the descent, and are inspired to tag Mount Gordon while we have the daylight. Soft snow marks the descent again, and we head for the comfort of the Bow Hut to settle in for the evening.

Although not the first hut built in the area, the Bow sleeps 30 and is the largest and most heavily visited. The huts, four in all on the classic Wapta route, are the result of a few dedicated individuals and stem from the early explorations of the region. 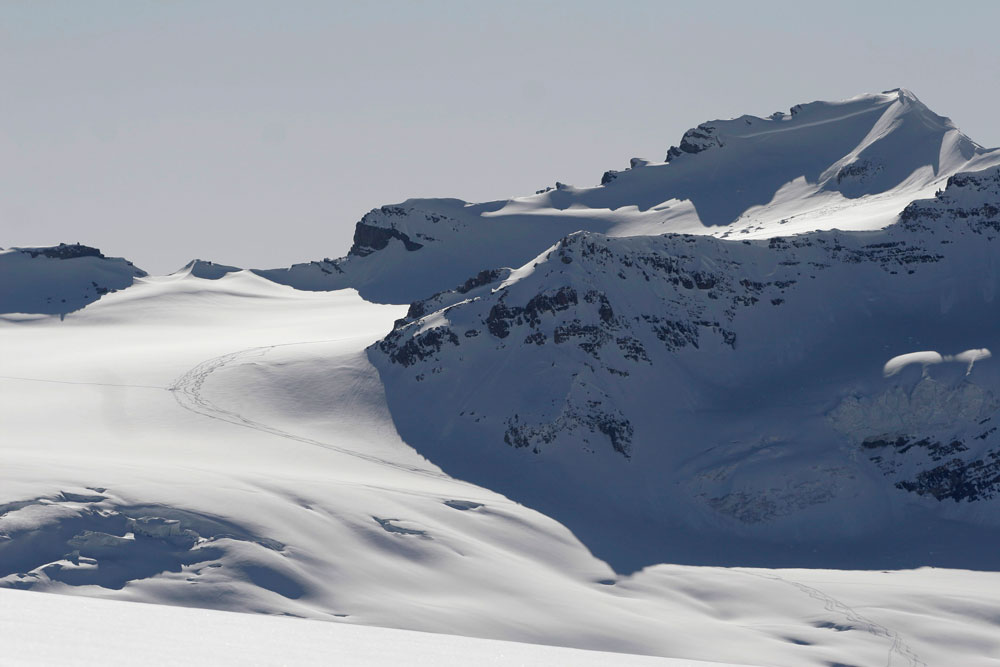 An ambitious attempt to ski the Continental Divide from Kicking Horse Pass to Jasper in 1960 by ski guide Hans Gmoser and written up in the Canadian Alpine Journal peaked interest in the region. Further adventures in 1963 by ski guide Peter Fuhrman helped lead to the first hut in the area. Following a trip with clients Lucio and Vicki Mondolfo in the Balfour Pass area that was cut short by foul weather, Fuhrman and the Mondolfos agreed that a hut would help extend exploration and adventures in the region. The first hut, designed by Calgary architect Philippe Delesalle, was essentially a fiberglass igloo. The Mondolfos financed the hut, Calgary-based Century Fiberglass built it, and Fuhrman, with the help of Art Patterson and the Calgary Ski Club, erected the hut near Balfour Pass in October of 1965.

Clouds move in on us as we reach the modern-day Balfour Hut. Situated below a long and low-angle descent along the Vulture Glacier, the humble Balfour Hut is little more than a roof and four walls, but it is a welcome change from the much larger and busier Bow Hut. The Balfour Hut serves as a gateway to the Balfour High Col, one of the more dramatic sections of the full traverse and a place where many people get turned back by foul weather. Crossing the Balfour High Col requires traveling through the crevasse fields on Mount Balfour’s east side. Without good visibility, route finding is difficult. Our group awakens to another crisp bluebird day, and our weather anxieties pass as we travel through the crux of the tour with endless views and nary a glitch. Our next stop is the Scott Duncan Hut but, just as the many folks who explored this region before us have found, there is plenty of terrain to explore en route.

Art Patterson and Peter Fuhrman proved to be influential in the rise of the Wapta area huts. By 1968 three huts were established: Peyto Hut at the north end, Bow Hut above Bow Lake, and Balfour Hut near Balfour Pass. Today, these huts have all been replaced or rebuilt to meet the demands of mountain weather and skier traffic. The final hut, Scott Duncan, named after a young ski mountaineer who died in 1985, was added to the southern end of the traverse in 1988. When initially built, the huts were donated to the Canadian Government, maintained by Parks Canada and free to the public. In 1989, an agreement between Parks Canada, the Canadian Government and the Alpine Club of Canada (ACC) transferred responsibility for the huts to the ACC. The ACC now charges a nominal nightly use fee and, in return, maintains and books the huts. The huts all vary in size and style but, regardless of the particular amenities, they make touring the Wapta area a treat. Each hut provides cooking facilities, bunk space and, most importantly, shelter from the elements. 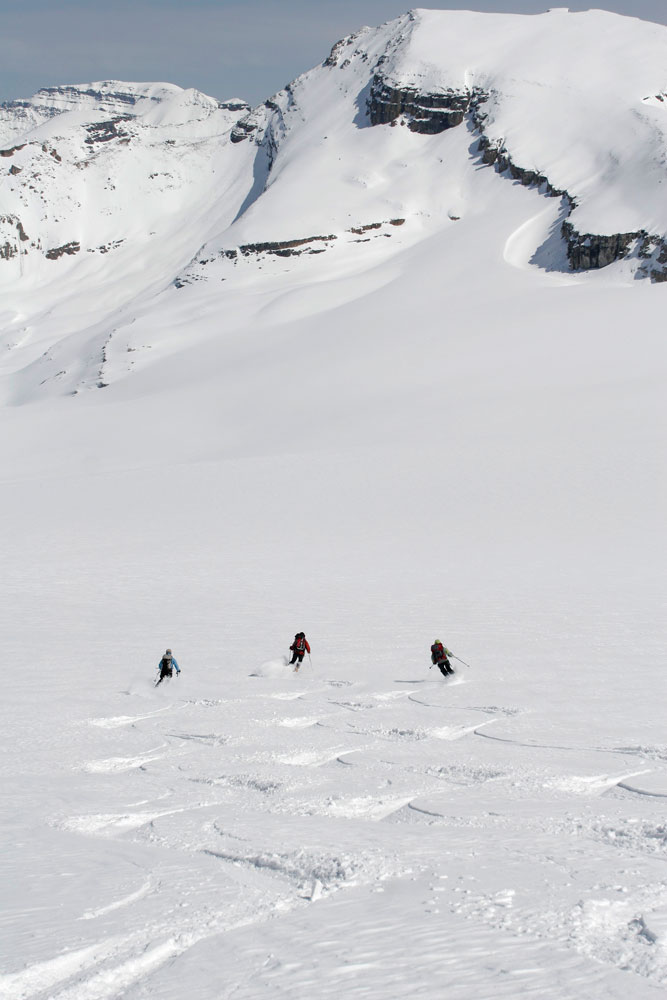 The elements have proven forgiving on our trip through the Wapta Icefields. We’ve all heard tales of whiteout conditions and skiing in the proverbial “milk bottle” on the Wapta Traverse. It’s our fourth day of cold, high-pressure weather, and we recognize the grace of such good fortune. Once again, we find ourselves on a ridge top discussing the multitude of options before us. We could head for the summit, ski off the saddle and explore the next basin, or continue along the classic Wapta route toward the Scott Duncan Hut. Before a decision is made, the scenery distracts us yet again. Talk turns to past trips, peak names and the seemingly endless opportunities for ski mountaineering in this dramatic setting. The scale of the landscape demands that we stop to enjoy it and discuss its potential and its inspirational qualities. Our crew of well-traveled backcountry folk could easily stay here sharing tales and contemplating various possibilities for adventure, just as the early ski mountaineers in the area must have done. The landscape inspires us to continue exploring, just as it has inspired many before us and will continue to inspire many more to come.