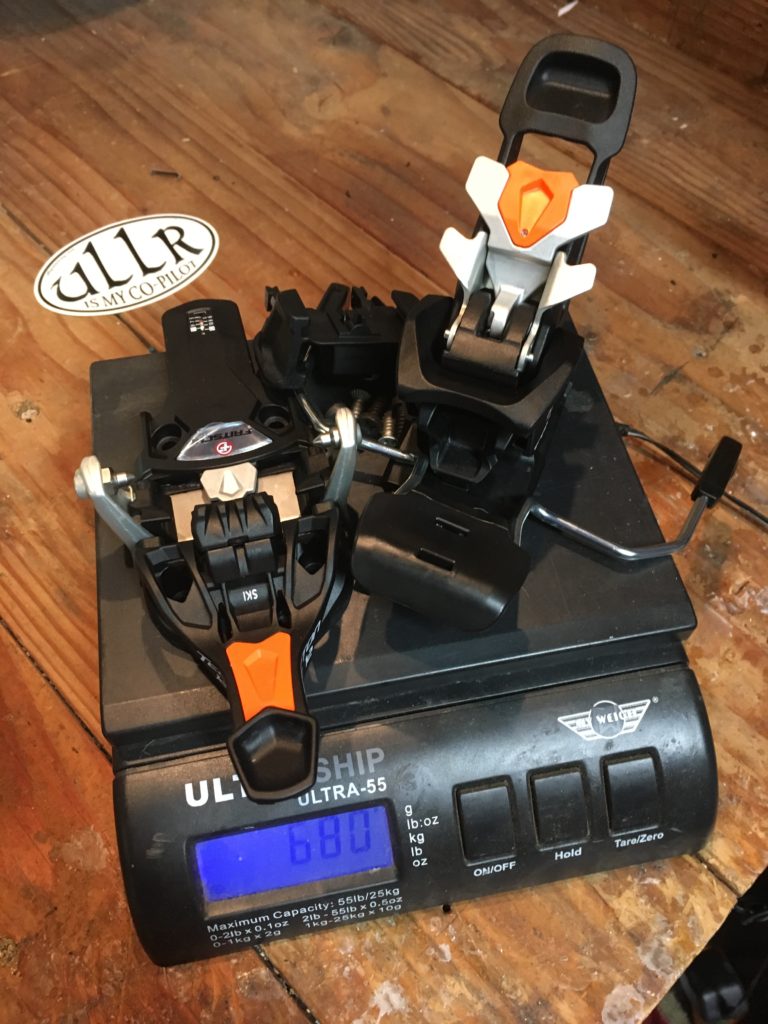 The latest tech binding to make our test fleet is the Fritschi Tecton. As tech bindings evolve, the designs can be categorized into one of three general categories – minimalist, full-featured and – for lack of a better term – freeride. The Fritschi Tecton binding fits the freeride category. It builds on the Fritschi Vipec (full-featured) by adding a step-in heel unit akin to that of an alpine binding, thus giving it the freeride designation. The Tecton goes head to head with the Marker Kingpin.

Right out of the box, the Tecton looks and feels techie and, although not minimalist light, the Tecton weighs in at a respectable 680 grams (per binding) including brake and screws on our scale – about 100 grams lighter than the Kingpin and not far off the Dynafit Radical 2 (640 grams) or Fritschi Vipec (630 grams). It offers a release value of 5-12. Like the Fritschi Freeride Pro of yesteryear, the Tecton is mostly plastic in construction, which undoubtably is how they keep the weight in check.

The toe piece, which is the same as the one used on the Vipec (now the called Vipec Evo), offers more tech than its competitors. The toe piece is based on the same pin-tech principles as other tech binders, but the design takes the basic technology a step further by adding a new level of lateral movement (13mm) and an adjustable release value. In fact, the Fritschi Tecton / Vipec toe piece is the only tech binding toe that remains releasable in tour mode. This feature adds a level of safety not seen in other brands and means that you can count on releasability should you find yourself caught in an avalanche while in tour mode. It’s also worth noting here that the first generation Vipec toe was finicky to step into, but Fritschi has refined the Vipec/Tecton toe and the unit now functions just as you would hope – allowing for a step-in process as easy as any tech toe on the market. 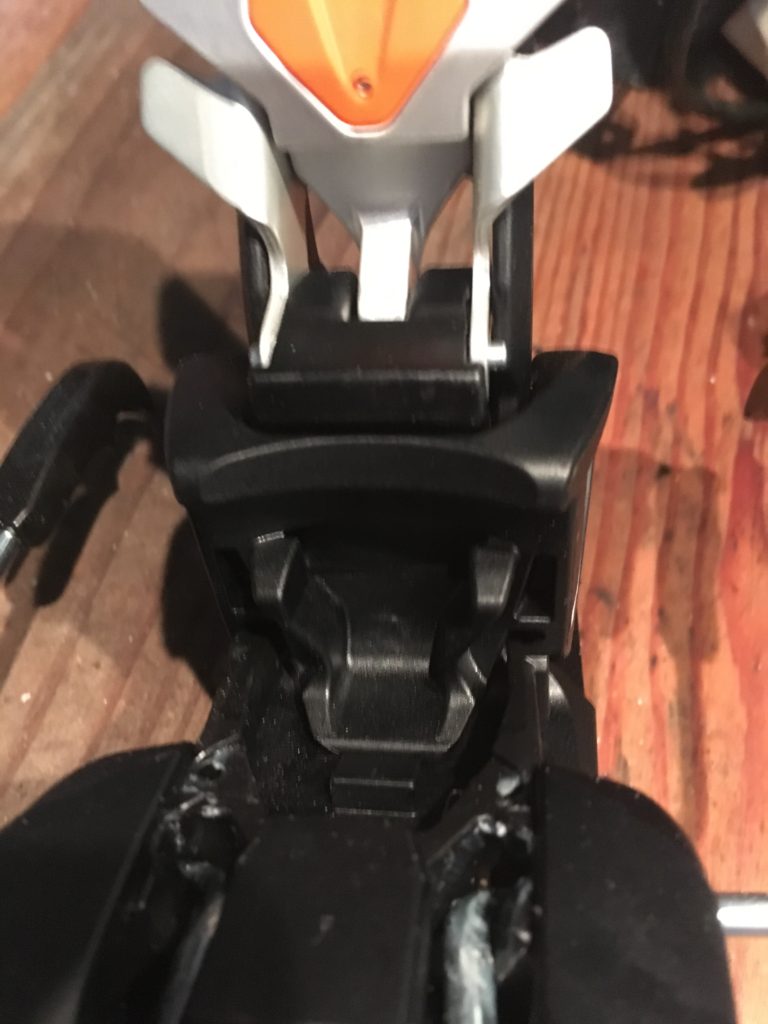 the “power rail” is visible in the heel pocket.

Tour mode offers three heel positions – flat, low and high. The flat or no lift position offers a reasonably true flat feel and a nice stride in low angle terrain. Beyond simply offering a more alpine binding like heel hold down, the Tecton has some unique tech to help ensure retention is solid – namely what Fritschi calls the “power rail.” The power rail is essentially fittings molded into the heel that align with the traditional heel fittings on a tech compatible boot. It’s not a pin system but more simply raised features in the heel pocket that help add security to the holddown.  Fritschi offers a good animation showing mode change and heel lift use on the Tecton. 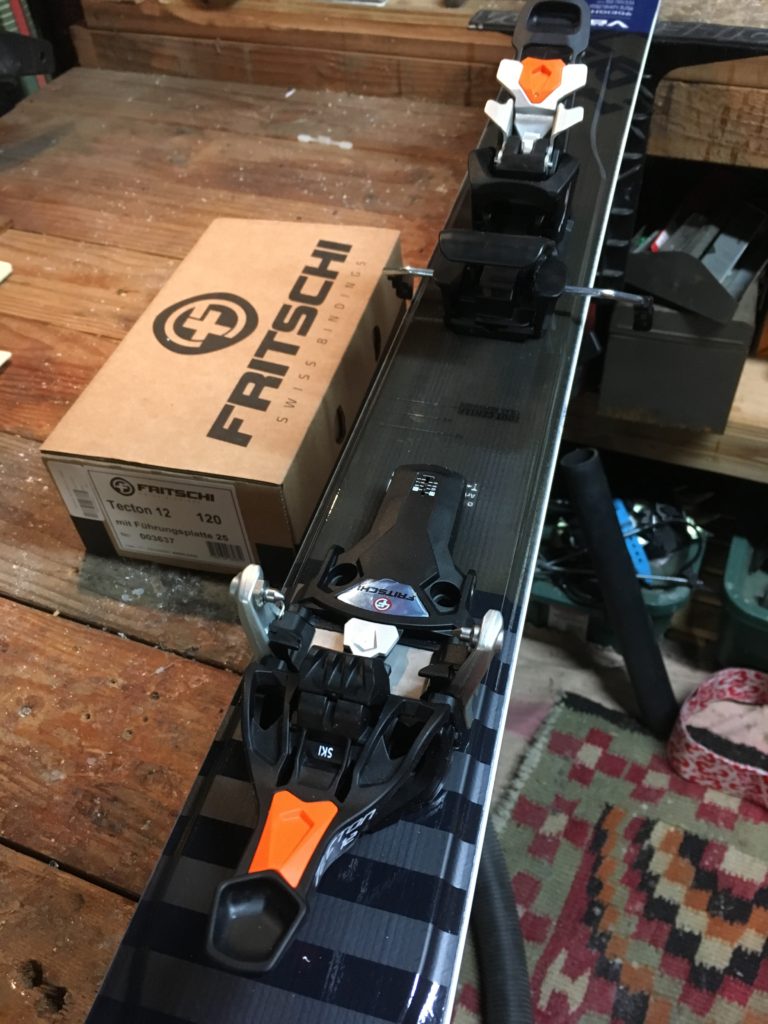 The Tecton offers the solid retention and power transfer that you would expect from an alpine style heel unit. Stepping into the binding offers little learning curve and the simplicity of the mode change makes for easy transitions on the skin track. Skiers new to tech bindings will experience few hurdles in transitioning to the Fritschi Tecton.

More than ever, choosing the right tech touring binding comes down to personal preferences and primary use. The Fritschi Tecton is positioned well to fill the need for a tech touring binding that feels equally at home on the ski hill as it does in the backcountry. Fritschi engineers have added safety features with advanced releasability tech in the toe unit and have addressed a general ease of use and functional familiarity that is sure to appeal to alpine crossover users.

Check pricing and availability of the Fritschi Tecton Binding and support offpistemag.com