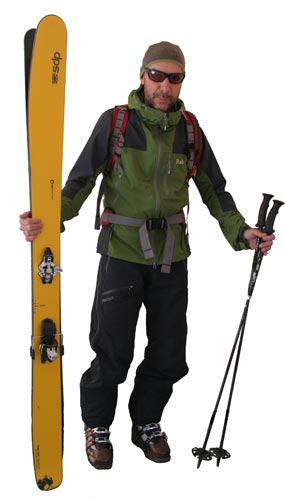 The Jaded Local is generally an anti-social creature. Unless you happen to be part of his inner circle or, perhaps, an attractive member of the opposite sex, you’re unlikely to engage him in much conversation. Although far from rare or endangered, he can be difficult to spot in the backcountry as he travels in small, tight-knit groups and rarely wears the latest in brightly colored outerwear.

Though commonly found in mountain communities throughout the world, the Jaded Local is not known to travel much; he’s local for a reason. He tends to stay put in his home mountains where he prefers the path less traveled. High elevation and low population is his motto. When not deep in the backcountry away from resort boundaries in search of the next secret stash, the Jaded Local can be found warming his favorite bar stool, drinking whatever is on special and ranting about the way it used to be “back in the day.”

He is best left to ski amongst his own kind, though his knowledge of the local terrain and snowpack is often encyclopedic and the envy of any skier considering encroaching on his habitat. Uptrack chitchat with Jaded Local is minimal at best — unless he catches wind of tourists (any stranger in his mind) in his ‘hood and gets back to ranting about how it used to be. If you happen to meet him at the edge of his preferred watering hole and quietly offer to buy him a couple of rounds, it’s possible he might share some beta, but beware of the high potential for a sandbag.

Check out the Gearhead, the Luddite and Bro Brah