Backcountry skiers can be a curious bunch. We come in a variety of flavors and there are several easy stereotypes to poke fun at. Of course, we all hold traits from a mix of stereotypes, but in the spirit of making fun of ourselves, we broke backcountry skier personalities into six classic stereotypes — Gearhead, Jaded Local, Luddite, Bro Brah, Rando Racer and Newby. First up, the Gearhead. 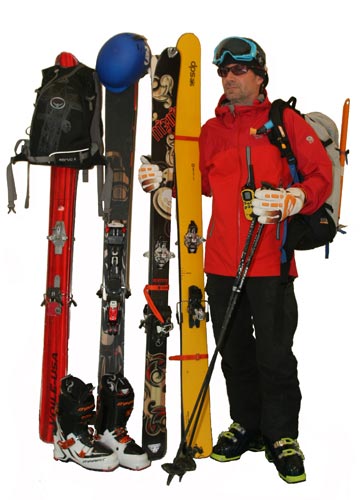 The common Gearhead is a gregarious creature that thrives in urban and mountain environments alike but is, perhaps, most easily identifiable in his preferred habitat, the garage or man-cave, surrounded by his sizable collection of equipment, new and old. In the backcountry, Gearheads are easily recognizable by the colorful plumage of the latest Gore-Tex outerwear in which they are clad and the number of accouterments dangling from their packs.

A true Gearhead thinks nothing of adding to his ski, jacket or pack quiver on an annual basis or throwing three pairs of skis into the roof box for a day of skiing only to drone on about which pair is most appropriate for the day’s snow conditions. Despite his affinity for new equipment, the Gearhead is equally likely to hold dear the occasional piece of old equipment — a favorite hat, a particularly “great” pair of ski poles or a discontinued soft-shell jacket that was simply the “best ever.”

When asked about equipment, and even when his opinion is not solicited, the Gearhead is well known to rattle on about ski dimensions, rocker profiles, outerwear breathability ratings and boot weights. The Gearhead prefers his beer hoppy and his coffee strong. When not consumed with talking about ski gear, he is prone to discussing coffee roasts or perhaps the latest seasonal brew from his current brewery of choice. Although not generally considered dangerous, Gearheads are infamous for spending more time talking about ski gear than actually skiing.

Next up: The Jaded Local