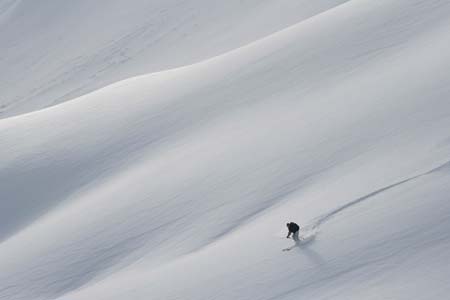 Rogers Pass sits between Revelstoke and Golden, British Columbia on the Trans-Canada Highway. The Pass boasts an annual snowfall in excess of 40 feet and roadside access to some of the best ski touring terrain on the planet. For more than five decades, the Glacier Park Lodge has offered accommodation at the Pass, making a convenient basecamp for backcountry skiers in search of roadside attraction skiing that rivals remote hut access. In its prime, the 50-room hotel–operating under a lease with Parks Canada–offered two restaurants plus a gas station and transformed into a bit of backcountry ski hostel during the prime winter ski months. Unfortunately, the lodge fell on hard times and has been shuttered since 2012. As of October 2016, Parks Canada has taken control of the site and announced the lodge will be demolished. 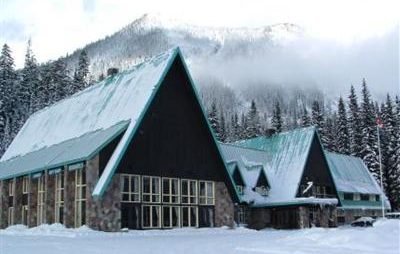 The hotel sits within Canada’s Glacier Park and operated for 40+ years under a lease agreement with Parks Canada. The lodge and it’s lease have been at the center of a multi-year legal battle between previous ownership and Parks Canada. Following an undisclosed settlement, Parks Canada took full control of the property in October, announcing; “While a full evaluation of the sites will take place in the coming months, we do know that the structures are now beyond repair, are unsafe and require demolition as they have deteriorated considerably since their closing in 2009 and 2012.”

Though the loss of the lodge has been felt since its closure in 2012, the announced demolition marks the true end of an era for backcountry skiers traveling from afar to explore Rogers Pass. It was hard to beat the out-the-door ski access that the Glacier Park Lodge offered – no driving required. The Pass provides access to terrain equal to that found out the door of remote backcountry huts and the hotel made for some memorable ski adventures. At sixty bucks a night plus buffet dinner deals, the vintage hotel transformed into a ski bum’s dream, complete with a large hot pool for après ski lounging and wood-clad bar for evening story telling. 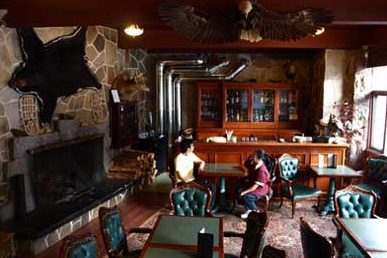 Parks Canada says that future redevelopment plans will include public involvement but that demolition and ecological site evaluation are the current priorities. Of course, the skiing at Rogers Pass remains world-class and you can still car camp in the parking lot, but the opportunities for budget accommodation offering skiing from the doorstep are a thing of the past, at least for the near term – RIP Glacier Park Lodge.

“Parks Canada is pleased to announce that we are now solely responsible for the properties of the Glacier Park Lodge hotel and service station located in Rogers Pass. Parks Canada’s immediate priorities are to secure the properties and mitigate the health and safety risks at the sites.

Parks Canada recognizes the contribution Glacier Park Lodge made to the experiences of visitors to Glacier National Park over the years. The area around Rogers Pass is an integral part of Canada’s national transportation corridor, and offers access to world-class hiking, backcountry skiing and breathtaking scenery for any traveller. Glacier Park Lodge was a valuable part of these experiences for many years.

While a full evaluation of the sites will take place in the coming months, we do know that the structures are now beyond repair, are unsafe and require demolition as they have deteriorated considerably since their closing in 2009 and 2012. Next steps will be to remove the buildings, remediate the sites and draft plans for any redevelopment in the area to meet visitor needs as well as improve the ecological condition of the site. Any potential redevelopment will involve public engagement and consider present and future summer and winter services, visitor safety, and cultural and natural resource management requirements.

Significant improvements are already underway in Glacier National Park as part of Parks Canada’s unprecedented investment in infrastructure work within national historic sites, national parks, and national marine conservation areas across Canada. Projects in the Rogers Pass area include TransCanada Highway improvements, a new permanent washroom facility adjacent to the Rogers Pass Discovery Centre and upgrades to aging water and sewer infrastructure. Investments in visitor infrastructure will ensure the quality and reliability of visitor facilities and will continue to enable Canadians to connect with nature. Parks Canada manages one of the finest and most extensive systems of protected natural and cultural heritage areas in the world, and Rogers Pass is among these treasures. Parks Canada looks forward to sharing this iconic part of Canada with visitors as a place to experience the outdoors and learn about our history for generations to come.”