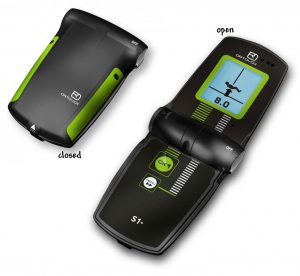 If we find ourselves needing our avalanche beacons for a search, something has gone terribly wrong. Either we underestimated the avalanche hazard, we broke safe travel protocols, we made a poor terrain choice or, quite likely, some combination of the above. Regardless, the first step in recovering from our mistakes is to move into companion rescue mode as quickly and smoothly as possible. Understanding how to effectively use our avalanche beacons is critical to the companion rescue process. Digital technology continues to streamline beacon use but all beacons require practice to master under pressure.

The Ortovox S1+ is the flagship beacon from Ortovox. It features three antennae, a digital processor and the ability to indicate and flag multiple signals — all standard features for today’s advanced beacons. The Ortovox S1+ also has a couple of features that set it apart from other top-end beacons: smart antenna technology and a graphic screen.

Smart Antenna Technology
The proprietary smart antenna technology (also available on the Ortovox 3+ and the Zoom+) automatically switches to the best transmission antenna based on the beacon’s orientation to optimize sending signal strength. The idea is that an avalanche beacon can end up buried in almost any variation of positions — horizontal, vertical, angled, etc. With other beacons, burial orientation can impact the range at which a receiving beacon will pickup the signal because the primary transmitting antenna may end up in a less-than-ideal orientation following an avalanche burial. You can test the phenomena by taking a transmitting beacon and experimenting with its orientation while using a second beacon on receive to detect its signal. You will see how a beacon’s burial orientation impacts signal reception on the receiving beacon. The S1+ is able to switch between antennae based on the beacon’s orientation, thus potentially improving the range at which searchers may pick up the signal. It’s similar to how your phone senses vertical or horizontal orientation and adjusts the display accordingly.

Graphic Screen and Display
The second technical feature that helps set the S1+ apart is its graphic screen and grid-like display. All modern beacons have a display offering distance and directional guidance during a search, but the difference with the display on the S1+ is its ability to show a signal’s relative position or positions of multiple signals at the same time. Imagine a two signal search where both burials are within range. The big directional arrow on the screen directs the searcher to the closest signal first, while the second signal icon on the screen shows the next signal’s relative location — left, right or perhaps further out than the first signal — indicating the direction of the strongest path toward that signal (the signal’s flux line). The S1+ has the ability to display relative location information for up to three signals. 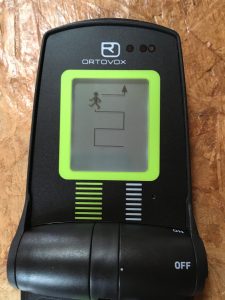 The Ortovox S1+ is the latest generation of the original S1 beacon. The S1+ saw a recall last season due to some internal issues. You can tell an S1+ is a current, post-recall version if the “MENU” button has a green square around it and a horizontal green line to the right. The older, recalled version has a white square and line. The S1+ is on the larger end of the size spectrum and advanced end of the technology spectrum for avalanche transceivers. Its flip-open style is unique among avalanche beacons and helps define its user experience.

Once turned on, the beacon runs though a standard self check and indicates percent of battery power remaining as well as offering a no cell phone icon to remind you to turn off other electronics that could interfere with the beacon’s operation. It defaults to transmit mode once the self check is complete. Close it up and it’s going to stay in transmit mode until you open it. Opening the beacon serves as the switch to receive/search mode. 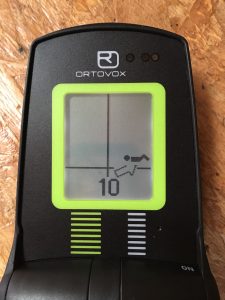 Searching for a single signal, the most common avalanche scenario — less than 5% of avalanche scenarios include more than two burials (read more), is as straightforward as any beacon on the market. The initial search screen — before a signal is detected — shows a traditional grid search pattern to follow until you are within range of a signal – IMAGE 1.

Given a single buried victim, searching moves very quickly from coarse to fine search. A signal is graphically represented on the screen’s grid with a small body icon, allowing you to move quickly toward the signal with the aide of a directional arrow and visual image – IMAGE 2. When you move in the direction of the signal, the bearing line on the screen aligns with the directional arrow and body icon, leading you toward the signal along the flux line path just like other beacons. As you get closer to the signal, the audio pulse rate increases and the numerical distance readout shows decreasing numbers.

Once you are within 2.5 meters of the signal, the S1+ moves to a fine search graphic that features a circle, a distance readout and arrows indicating which direction to move — in or out from current position – IMAGE 3.

In addition to the basic and advanced searching capabilities, the S1+ includes a layer of added functionality including a group check feature, a digital inclinometer and a built-in RECCO reflector. 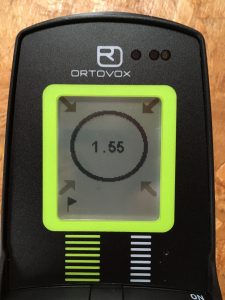 On the surface, the Ortovox S1+ is easy to use and simplifies the search process down to easy-to-follow steps that that are accessible to all users. But there is more to the S1+ than simple single burial searching. For more experienced users, it adds a couple levels of functionality including multiple signal flagging and a degree of programmability better suited to advanced scenarios and experienced users.

Given a basic two or three victim search where all signals are within range, the S1+ displays the representative body icons on the screen. A large arrow on the screen directs you to the closest/strongest signal first, while additional body icons indicate the relative location of other signals within range. When you move in the direction of the strongest signal, the bearing line aligns with the directional arrow and the body icon, leading you toward the first signal. The S1+ follows the signal flux line path just like other beacons. Once you are within three meters of the signal, you can flag it and begin to follow the next strongest signal path. While other beacons offer the ability to isolate the strongest signal and indicate how many signals are detected, the S1+ is the only beacon to offer a graphic representation of multiple signals’ relative locations. The S1+ has the ability to display relative location information for up to three signals.

Flagging worked quite well, especially in simple two-victim scenarios where the victims were well spaced apart. The flagged signal remains represented on the screen with a flag icon, so you can begin subsequent searches. If the S1+ detects four or more signals, you must engage 4+ mode. I won’t go into the details, but suffice it to say that the 4+ mode is for advanced users who understand micro search strips.

The S1+ processor was at times slower to filter signal information during multiple burials than a searcher’s urge to move quickly, and the slow processing lead to confusion more than once. The more complicated the burial scenario (close proximity/overlap) and/or the more inconsistent your search methods, the easier it is to confuse the S1+. Hence, practice is key to become proficient and take full advantage of the Ortovox S1+ technology.

Additional advanced feature include a deep burial mode that engages fine search at six meters distance and a signal overlap indicator that alerts you if multiple signals overlap during a search. Though important and functional features, these are meant for advanced users who have a solid understanding of flux line and burial position dynamics.

The Ortovox S1+ is a technically advanced beacon that handles simple search scenarios with ease.  Its range is strong, consistently offering 40-50 meters for initial signal reception. The learning curve for searching is intuitive and beginner users adapted quickly to its graphic interface, while advanced users were intrigued by its advanced tech and features. The beacon’s distinct point-and-go approach lead to fast search times for users of all levels. It is a step forward in information processing and is the only beacon that offers a graphic symbol that begins to reflect a signal’s relative location. The grid-like display is, I would guess, a step toward what we can expect from our avalanche beacons in the future.

However, the same advanced technology that sets the S1+ apart can get in its way. Advanced users found using the S1+ effectively required altering their known approach learned from following directional indicators on other advanced beacons like the Barryvox Pulse, BCA T3 and Pieps DSP. As simple as the system sounds, it’s still not always quite as easy as seeing the body icon on the screen, aligning the directional arrow and following that path. Signal processing was slowed by multiple signals and complicated by inconsistent search methods – both are good arguments for why practicing is so important to efficient searching. Slow processing and inconsistent search issue are not unique to the S1+. Every avalanche beacon requires learning its signals and processing behavior to achieve the most efficient search results. With a few practice runs to understand its behavior, the S1+ moves swiftly through a search. We’ve all heard it before, but the advice rings even more true when talking about advanced avalanche transceiver technology – practice makes perfect. The Ortovox S1+ offers leading edge technology in its Smart Antenna and graphic display to help facilitate effective companion rescue.