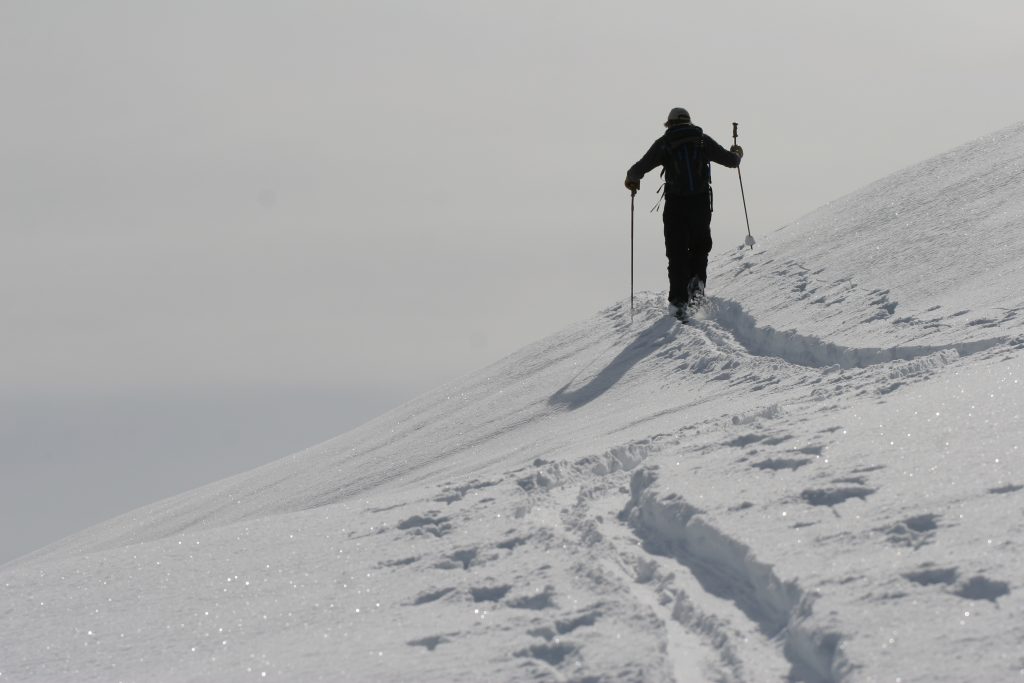 First, there was the epiphany. It was a deep day, sixteen inches of new and still snowing. The hookup began as many do, spontaneously meeting at the trailhead with the same objective in mind. I was with my two most regular ski partners. Our spontaneous partner was a local hardman with a reputation for being super strong and putting in really steep skin tracks. I took the first shift breaking trail and it didn’t take long until I was ready to hand it over to the next in line. We had agreed that the most efficient method would be to take short shifts out front so we could maintain a solid, steady pace.

Hardman took over next and swung his skis straight up into the fall line. The terrain wasn’t too steep here, so we all followed. Gradually, the skin track got steeper and steeper. To his credit, even breaking trail, Hardman started to pull away from us. Not to be outdone, we kicked it in and worked harder. Conversation stopped, breathing increased, poles strained under the load, and still Hardman pulled away. Soon the cursing began, prompted as we each had moments where we slipped backward in the track. Finally, once we’d had enough trying to cling to the steep track, we decided to break our own trail. Taking turns kicking in a lower angle track, we were soon talking, laughing and generally enjoying our ski tour again. The tension we had been holding in our backs and arms began to diminish as we got into the groove of working with the terrain instead of fighting it. Finally, as we approached the top of the ridge, there was Hardman – we had caught him! It was a moment of clarity. I realized that not only was an artful, aesthetic uptrack more enjoyable to tour on, but it was actually faster! Given the fact that 80% of the average ski tour is climbing up, shouldn’t the up be fun, too?

From that day on, I began an extended study of uptracks. I made it a personal challenge to eliminate kickturns from my trail breaking and to improve existing skin tracks with well-placed edits to improve the track’s efficiency. The game became seeing how little energy I could use to get up the hill. In doing so, my uptracks evolved from mere pathways up the mountain to eloquent, artful tours that require a minimum of energy, follow a safe route, and give me enough information about the snowpack to determine where the best skiing will be found. Keep in mind that your skin track is a legacy that you leave – often for weeks at a time. People will almost always follow a broken trail rather than creating a new one. Even after a snowfall, skiers tend to reopen an old track rather than start fresh. Thus, regardless of the quality of given track, it often sticks around for a long time. With this in mind, it really pays to do it right the first time.

Now, to be fair, if an uptrack is too low angle, there will be wasted energy in the extra distance traveled. Think about hiking trails you have been on. When they are too steep, even a relatively short trail can take the wind out of you. Conversely, an old horse trail that never exceeds a 10% grade takes forever to gain any elevation and almost begs you to cut switchbacks. The happy medium is the trail that allows the miles and vertical to pass by unnoticed. This is our goal on skis as well. Start with an angle that feels like you are climbing, but not so steeply that you feel a strain in your legs. Keep in mind that the uptrack will provide less grip with each skier that climbs it, so if you plan to take multiple runs this is all the more important. Next, avoid using your heel lifters. I know this is a shock to many of you and you will probably stop reading right here, but for those of you who do continue reading, it is actually more efficient to tour without your lifters up. Your stride length will increase without the lifter and therefore creates a more efficient movement. As the uptrack becomes slicker with use, you can raise your lifters and still climb it with ease.

There is an old adage in mountain guiding, “The best decision is the one that keeps the most options open.” This is true in track setting as well. Look for terrain that allows you to travel where you want and turn where you want, as opposed to forcing you into steep, tight terrain where you need to resort to the dreaded kickturn. While the kickturn is unquestionably a crucial tool that every skier should master, they should only be applied when absolutely necessary. Choosing terrain that will allow you to walk around a turn is not only more efficient, it eliminates the backup of skiers waiting at the kickturns for people in front of them. 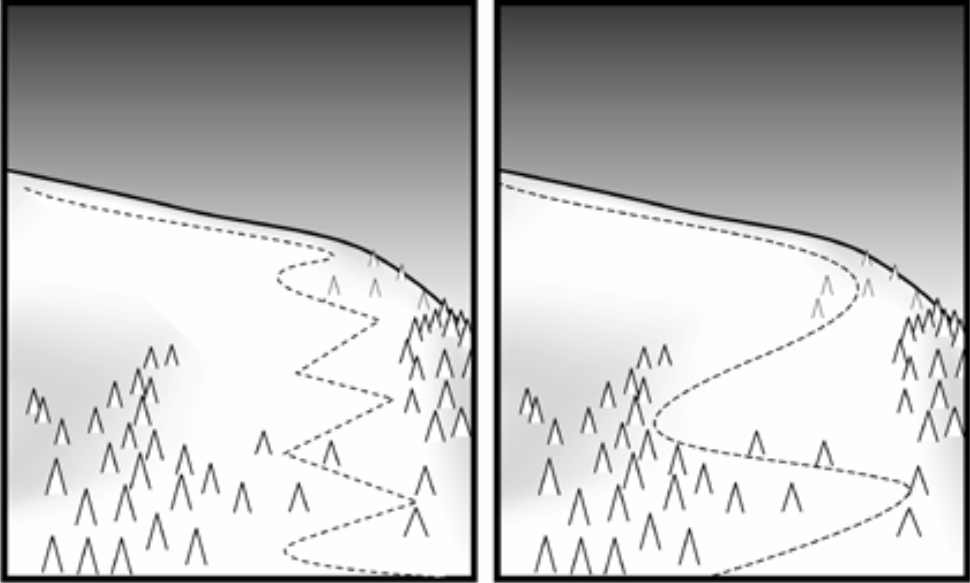 Micro terrain features are key to an efficient skin track. Small benches in the terrain and flat areas around trees make for ideal places to change directions, help to keep a nice flow going, and help to minimize your efforts. When you are forced into making a kickturn, there are several tricks that make them easier for everyone. First, look for soft snow to make your kickturn (hopefully this is abundant and can’t be avoided). Try to flatten the uptrack slightly as you enter and exit the turn and pack a good platform on which to execute the turn.

Another important aspect to a good skin track is long traverses between changes in direction. Long traverses are beneficial in many ways. First of all, they allow you to cover more terrain and see what the snow is like on different aspects. This critical aspect of a tour is often lost on the skier who switchbacks steeply up the fall line. While your track must follow a safe path up the mountain, a cunning route avoids exposure to dangerous slopes while providing the opportunity to find indicator slopes where you can conduct on the fly stability tests (see Off-Piste XXV March 2005), thus gaining valuable avalanche information without losing unnecessary time on your tour. A well thought out route allows you to spread out in avalanche terrain and regroup in safe areas to discuss conditions and make decisions as a group. Finally, by keeping your traverses long, you are less likely to have skiers stacked up above one another in the event of an avalanche. 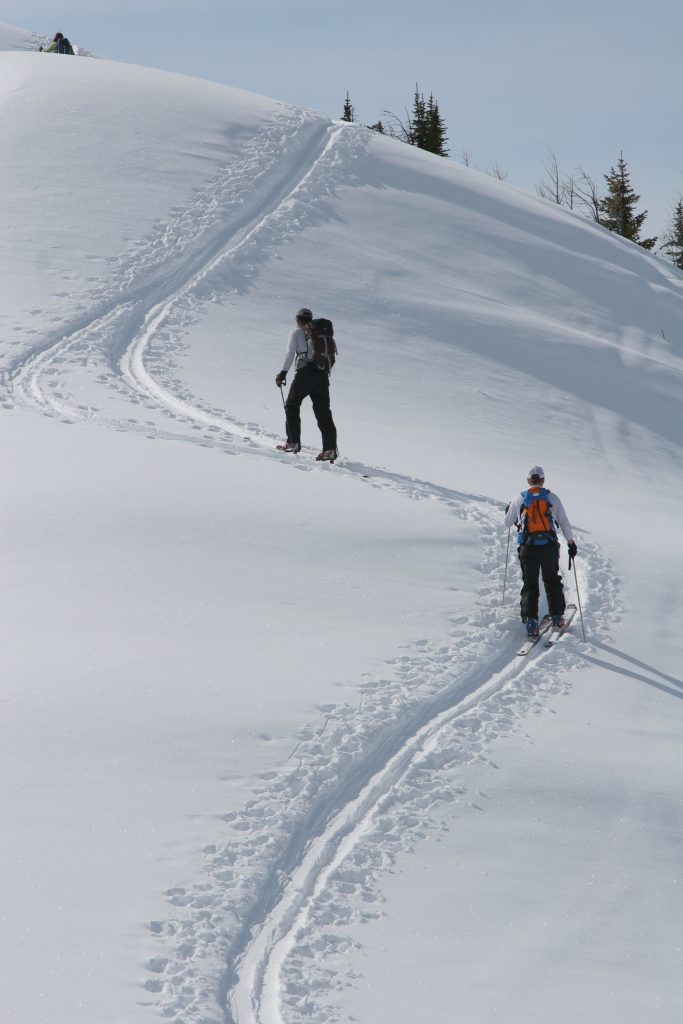 When traveling in hilly terrain, contour around rolls as opposed to traveling up and over them. This allows you to minimize elevation loss, as well as having a steady downhill grade if you need to ski out on your track. Think about following the lay of the land keeping in mind that terrain often repeats itself. By this, I mean that frequently rock strata lies at a certain angle, ledges or gullies are often spaced at regular intervals, benches typically slope in the same direction, and the quality of snow is often consistently better or safer on a certain aspect. Paying attention to these characteristics allows you to use them to your advantage.

A well set uptrack is artful in the way it moves your group through the terrain with maximum speed and minimum effort. You are creating a travel corridor that other people will either enjoy or curse you over, sometimes for long periods. I hereby propose a challenge to skiers and track setters everywhere: try incorporating some of these tools into your next uptrack and see if you use less energy, climb faster and have more fun. Isn’t it time you had an epiphany of your own?