Believe it or not, regardless of what triggers an avalanche, every avalanche has one thing in common: they all fail on a weak layer of snow. Personally, I would much rather be out skiing than standing around in snowpits looking at snow crystals and analyzing weak layers. However, weak layers are still important. I am not going to bore you with the technical nuances of secondary crystal metamorphism. In fact, there is a lot of snow science that is still not fully understood, even by the guys in the white lab coats. Instead, I offer a low-tech approach to understanding, finding, and identifying weak layers in the snowpack.

To begin, let’s talk about the basic ingredients of an avalanche. We need three things for an avalanche to occur: a slab, a bed surface and a weak layer. A slab is a unit of cohesive snow – as opposed to loose snow. The bed surface is the layer of snow that the slab slides on and is what remains on the surface after the avalanche has run. The weak layer is what facilitates the slide and is what we are going to discuss here.

Before we talk about weak layers, let’s talk about layers in general. Every storm has its own unique environmental conditions. As snow from a given storm lands on the ground it creates a layer of snow directly related to the weather conditions at the time it fell. That’s why the snowpack is not a uniform blanket, but instead a series of layers. As backcountry skiers, we are concerned with the bond between these layers. A weak layer, much as the name implies, is a layer of snow that isn’t as strong as the layers of snow above or below it. Common sense tells us that this is an inherently unstable situation.

Okay, so now that we have a handle on layers, more specifically weak layers, how do we find them while we are out skiing? The easiest way to find them is to know what we are looking for. That’s where the pros come in. By checking the avalanche forecast each morning, you can get an idea of what weak layers we should be on the lookout for. There are several common weak layers that are the culprit in the majority of avalanches that threaten us as backcountry skiers.

Let’s begin with one of the scariest and most persistent weak layers – faceted snow. Facets can occur at the snow surface or deeper in the snowpack. Facets, commonly called sugar snow because they resemble loose sugar, change over time into large, angular grains that lose the ability to bond with neighboring snow crystals and layers. These crystals (facets) form a weak layer in the snow, one that can persist for long periods of time in the snowpack. The two main factors that drive this process are cold temperatures and a shallow snowpack. They are common in the early season in maritime climates and can persist all season in continental climates.

Another type of faceted snow is surface hoar. This weak layer is actually appears on the snow surface as the winter equivalent of dew. Feathery in appearance, surface hoar crystals can act like a house of cards when new snow falls on top of them. What makes surface hoar so spooky is that it can hold quite a bit of snow before it begins to fail. It can also remain intact within the snowpack for many months or even the entire winter. It can be triggered from adjacent slopes, and when it does fail, it can propagate long distances.

Another weak layer is low density snow. We all love to ski blower pow, but when that blower has a layer of slightly warmer, denser, or wind effected snow on top of it, we have a very unstable situation. This is a common weak layer that we deal with during and shortly after storm cycles. Even during a single storm, temperatures and winds can fluctuate considerably, and we can find weak layers within the new snow deposited during one snowfall. The nice thing is that these weak layers tend to settle out and gain strength fairly quickly and don’t remain in the snowpack for prolonged periods.

On the Fly Pole Test

Now that we know some of the most common weak layers, how do we find them? One of the easiest ways is by simply probing the snow as we tour. Pushing a pole into the snow allows us to feel density changes within the snowpack. In an ideal world, the snowpack density would slowly increase as it gets deeper and closer to the ground. If, as we push a pole into the snow, the density is consistent or increasing and it suddenly gives way to the pressure of the pole, this is a good indication that there is a weak layer within the snowpack. The beauty of the pole test is that it doesn’t take any time out of your tour and you can do it on various aspects and elevations throughout a tour. The downside of the pole test is that it is not very good at finding thin weak layers or layers deep in the snowpack.

To find thin weak layers, we are going to have to pull out our shovels and dig a little. Knowing what weak layer to look for is going to help us decide where to dig. For example, surface hoar is more commonly found at or near treeline, in areas with a clear view of the sky. Once we have a pit wall, a hand hardness test yields a quick look at the layering of the snowpack. Often times, weak layers will be distinct in the pit wall as they are a different color due to the different density of the snow in this layer. Finally, many of the bonding tests, such as the compression test and the Rutschblock test are particularly good at identifying weak layers. Do you need to pull out a hand lens and identify the guilty layer? Practically speaking, it’s enough to know that a weak layer exists and to get a sense of just how sensitive it is and how likely it is to propagate. 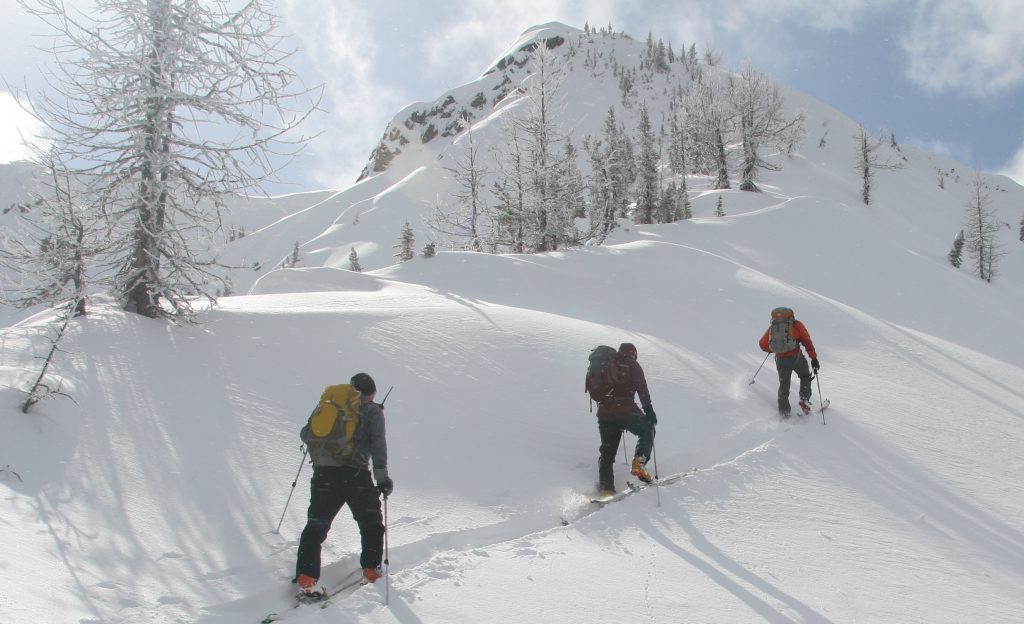 Now for a guy who purportedly likes to ski more than he likes dig pits, this is starting to sound like a lot of digging. If you feel that way as well, than its time to play our trump card – the terrain. With the information available to us by our local avalanche center, we should have a good idea of what weak layers are out there and where they might be found. Armed with this info, we can make terrain choices to tour in areas where we are least likely to find these weak layers. Sometimes, however, these layers are so widespread that there is no easy way to avoid the potential hazard of the layer.

At times like these, its good to have the skills to pull out a shovel, and in a representative site, conduct some bonding tests to see what the snowpack looks like right there and right now.

Being able to identify weak layers in the snowpack alone does not make you a safer backcountry skier. It’s merely a piece of the puzzle to factor into the decision making process. The snowpack can be extremely complex, is constantly changing and can vary considerably over relatively short distances. When you do pull out your shovel and begin digging, be aware that one thing quickly becomes apparent; the more you know, the more you know that you don’t know. You know?