La Niña is in the Air

You don’t need a weatherman to know which way the wind blows, but it’s the season to prognosticate about winter weather and snow. From the height of the beargrass and the plumpness of the squirrels to the study of analogous years and the science of large scale climatic forces, there are plenty of theories to fuel winter weather predictions. (Read what forecasters say about the winter 2021-22 ski season forecast)

One of the most talked about climate influences on the planet is the El Niño Southern Oscillation – probably best known by the acronym ENSO or better yet by its phases – La Niña and El Niño.  ENSO has the ability to influence global atmospheric circulation and consequently influences temperature and precipitation across North America and the globe.

This fall, the Pacific Ocean shows strengthening La Niña conditions – this means the ocean surface temps near the equator are cooler than average. Have trouble remembering the difference between La Niña and El Niño and their respective influence on the weather in your local ski stash? Keep reading. Below is an article from the Off-Piste Mag archives that lays out the details about ENSO and what it means for your ski season. It originally appeared in Off-Piste Magazine Issue 38.

It’s the subject of pre-season fantasies and anxieties alike: Will El Niño bring a ski season for the ages, or one to be forgotten? Do you find that there’s a mystique surrounding the phenomenon and what it has to do with your powder prospects? Perhaps you and your touring partners have discussed it between breaths on the uptrack. We offer you a foundation on which to base your ski-related musings as we examine El Niño/La Niña and its potential affects on your ski season.

Who is “The Niño,” and what does he have to do with your ski season? A 1997 episode of “Saturday Night Live” featured Chris Farley as a personified El Niño informing the viewing public that, “El Niño is Spanish for [dramatic pause] The Niño!” Well, he’s close. The climatological phenomenon known as El Niño got its name because of the time of year it most strongly affected the fishing industry off the coasts of Ecuador and Peru – around Christmas time – every few years. Warmer ocean waters replaced the cool, nutrient-rich waters that normally kept schools of fish so abundant. So, while it may have meant a lull in the fishing business, it allowed fishermen to be at home with their families for holiday festivities. Because the arrival of the switch in the weather coincided with the holiday celebrating the arrival of the Christ child, the phenomenon was named for the boy. But what is going on during an El Niño event? What’s really behind this long-sensationalized deliverer of disastrous weather or droughts? And how does it actually affect your ski season?

To answer that, we first need to back up and zoom out. Get those long-stagnant cranial neurons re-firing as we hearken back to your junior high geography lessons. Recall that there are trade winds that blow toward the west around the equator. Off the coasts of Ecuador and Peru, the trades drag warm equatorial Pacific surface waters westward, causing cooler waters to well up from below. Thus, a tongue of cold surface water extends out across much of the eastern equatorial Pacific, keeping warmer water to the west. This isn’t some newly arisen phenomenon; it has been happening for at least the past 130,000 years, and likely longer. Since the first communities were established on these coastlines, they have made good use of the phenomenon by fishing the cold, upwelled, nutrient-rich waters that are choked with fish. 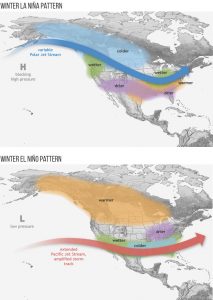 Now back to the trade winds. These trades aren’t going at break-neck speeds all the time. During some years they slow down, and in some years they speed up. Sometimes they even reverse. This fluctuation in wind speed is also associated with a fluctuation in air pressure that was first studied by Sir Gilbert Walker in the early 1900’s. He dubbed the fluctuation the Southern Oscillation.

Under the condition of slackening trade winds, there is more warm water toward the eastern equatorial Pacific. With stronger trade winds, there is more warm water in the far western equatorial Pacific. The slackening is known as El Niño, while the strengthening is known as La Niña. It’s quite a mouthful to keep saying “El Niño-La Niña,” so for short, scientists use the acronym ENSO (El Niño-Southern Oscillation).

Here’s where it gets really exciting. What happens next is a remarkable example of the global-scale synergy between hydrosphere (water) and atmosphere (air). We’ve already said that the trade winds usually keep the warmest waters in the western Pacific along the equator. These warm waters fuel massive thunderstorm systems that can be as large as half the area of the conterminous United States. When the storm updrafts reach jet stream level, the air flows out in all directions. This outflow of air literally “bumps” our jet stream, altering the storm tracks headed toward North America. Whether the equatorial storms occur more eastward or more westward along the equator affects where our snow storms are bumped and, subsequently, where they’ll eventually hit.

So, for the skier, ENSO is nothing but a shifting of the jet stream and a redistribution of our storm systems. Brain spinning yet? So, given the previous explanation, your ski season must be intrinsically linked to winds blowing off the coast of Peru, right? Well, consider the climatology. In the Pacific Northwest, British Columbia, and the Intermountain North, a La Niña winter has a greater chance to be cooler and wetter than average, and vice versa for an El Niño winter. For California and the Southwest, El Niño winters have a greater chance to be wetter than average, and vice versa for La Niña. Furthermore, the stronger the El Niño or La Niña, the greater the chance of seeing an out-of-the-norm winter.

But don’t kid yourself – it’s way more complicated than just that. The dirty little secret that gets drowned out in the ENSO hype is that any one climate signal doesn’t necessarily guarantee that your snow season is going to be a boom or a bust. For example, if we say that La Niña means a wetter, colder Pacific Northwest, we’re saying that either extreme snow storms are more likely, or that it’s more likely that there will be more storms. But it’s far from guaranteed. There are plenty of El Niño and La Niña years that are climatologically average, and there are plenty of neutral years – neither El Niño nor La Niña – that are climatologically extreme.

Basically, it all comes down to a game of probabilities. What are the chances that your local stash will have an above-average snowpack? Well, if playing the probability game wasn’t already hard enough to deal with, we’re going to up the ante and toss in some caveats. And you can bet your first-ever face shot that we can’t escape caveats!

Here are a few: Some regions in the West experience La Niña more strongly than El Niño (the Pacific Northwest and British Columbia). For some regions, the opposite is true. Some regions won’t typically see impacts from El Niño or La Niña when the signal is weak, but only when it is moderate-to-strong (the Sierra Nevada). Some regions may experience large variability within a season, where the early or late season may be more heavily weighted (Colorado). And if you ski Utah’s Wasatch, the surprising truth is that there’s just no reliable correlation between ENSO and the “Greatest Snow on Earth.” Therefore, friends, no matter where you ski, there’s not always a solid predictor to hang your hat on.

Here’s why it’s not guaranteed: The likelihood that any one snowflake will fall in any one location in the West relies on more contributing factors than you can shake a stick at. ENSO may be the main seasonal predictor, but it’s not the only game in town. There are a half-dozen other known large climatic oscillations occurring in concert with or against one another at any one time. Add to that the extreme variability in localized regional climates in the West, and you’ve got a recipe that can have a variety of outcomes. Now, we may have all but pulverized whatever diehard faith you previously had in ENSO seasonal prediction, but we’d like to rebuild some confidence by giving you an idea of how to anticipate your upcoming ski season. Remember that El Niño increases the chances of seeing or not seeing a mega-snowfall. The chairman of the University of Utah’s Meteorology Department and experienced backcountry skier Jim Steenburgh likes to think of it in terms of dice rolling. “What ENSO does is load the dice and affect the odds of ‘rolling’ an above-average or below-average snow year.” But you don’t have to gamble with your ski season. Steenburgh goes on to say, “How loaded the dice are depends on your geographic location and the strength and details of the El Niño or La Niña.” The most reliable means of deciphering a region’s “dice loading” is in its statistics.
There’s a ton of scientific literature out there to help you sketch out your odds, but for easy perusing, check out the NOAA site dedicated to ENSO or read the latest ENSO update from Climate.gov. Here you can find out if anything has changed since the writing of this article. No matter the state of the weather, the authors wish you a season of safe snow-trekking bliss and astounding face shots. And we heartily encourage you, if there’s snow in your mountains, for the Niño’s sake, to get out and ski it!
This article orginally appeard in OPMAG Issue 38 – Authored by Leigh Pender Jones and Wendy Wagner who share a love for backcountry skiing and hold Master degrees in Meteorology from the University of Utah.