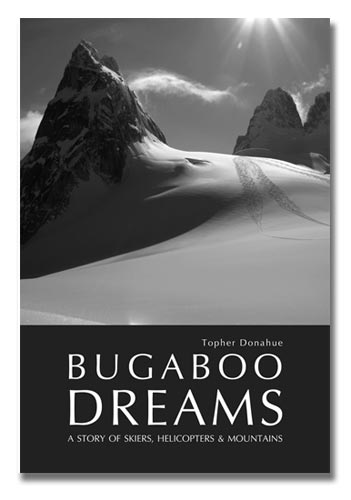 Hans Gmoser was a pioneering mountaineer and skier who pushed the limits of skiing and climbing in the Canadian Rockies and beyond. He also happens to have started the world’s first heli-skiing operation in the 1960’s. Bugaboo Dreams A Story of Skiers, Helicopters & Mountains by Topher Donahue captures Gmoser’s spirit of adventure and passion for skiing that gave way to the heli-ski biz.

It’s easy to understand Topher Donahue’s fascination with Canadian heli-skiing, which began as a half-baked idea between two broke Austrian skier friends in the 1950’s and became a $100-million industry. It continues today in the form of Canadian Mountain Holidays (CMH), a powerhouse of a business with 12 luxury lodges and access to the remote reaches of the Columbia Mountains in British Columbia.

Donahue lays out the history of heli-skiing in Bugaboo Dreams — A Story of Skiers, Helicopters & Mountains, which recounts the 44-year (and counting) legacy of Hans Gmoser and Leo Grillmair, who launched heli-skiing out of a desire to help people experience the wilderness.

A journalist and mountaineer, Donahue casts a wide net based on a promise to Gmoser that the story would not be solely about him. The result is comprehensive as Donahue recounts the history of heli-skiing through its founders, first guests, first guides (nicknamed “The Swiss Mafia” for their unique approach to guest service), and the remote, pristine beauty of the Columbia Mountains.

In the early days, guests slept in a rustic sawmill camp after a 43-kilometer tow behind a snowmobile. Donahue paints a picture of hard skiing, harder partying, camaraderie, and dedication to the mountains. Although the accommodations have improved dramatically along with the etiquette of guests and staff, the mission appears to remain the same: to provide the best skiing in the world.

Some of the most hilarious and gripping stories come from the early years as Gmoser, Grillmair, and their staff experienced the evolution of the industry they were creating — avalanche safety, guiding, customer service, and continuous expansion to include lodges, heli-hiking and heli-climbing in the Bugaboos, Adamants, Cariboos, Purcells, and other Columbia ranges.

Despite Donahue’s promise, I found myself wanting to hear more about Gmoser, who died at the age of 74 in a bicycling accident a few years ago. I also wondered about the critics of heli-skiing’s environmental impact and how CMH has responded to them. However, without sensationalism Donahue captures the powerful mystique of these mountains, which ensnare visitors and staff alike.

Describing the first trip that started it all, Donahue writes, “It was about summits, big features, new terrain, long runs, and adventure.” Anyone who appreciates that sentiment will enjoy this book.     — Eileen Garvin