The classic backcountry ski checklist – shovel, probe, beacon, brain – has also come to include the avalanche forecast, and most of us make the effort to check the forecast before we head into the mountains. But an important question that’s often overlooked is; “Are really absorbing the most important information contained in the forecast?” Sure, the avalanche hazard rating is important, but it means even more when you also understand the “Problem” behind it.

The first step to understanding the avalanche problem is to understand what type of avalanche you are dealing with. If you haven’t taken a Level One avalanche course recently, the Canadian Avalanche Center has a helpful tutorial that does a good job of explaining the eight avalanche types and their basic characteristics. The eight types are: loose dry, loose wet, wet slab, storm snow, wind slab, persistent slab, persistent deep slab and cornice. 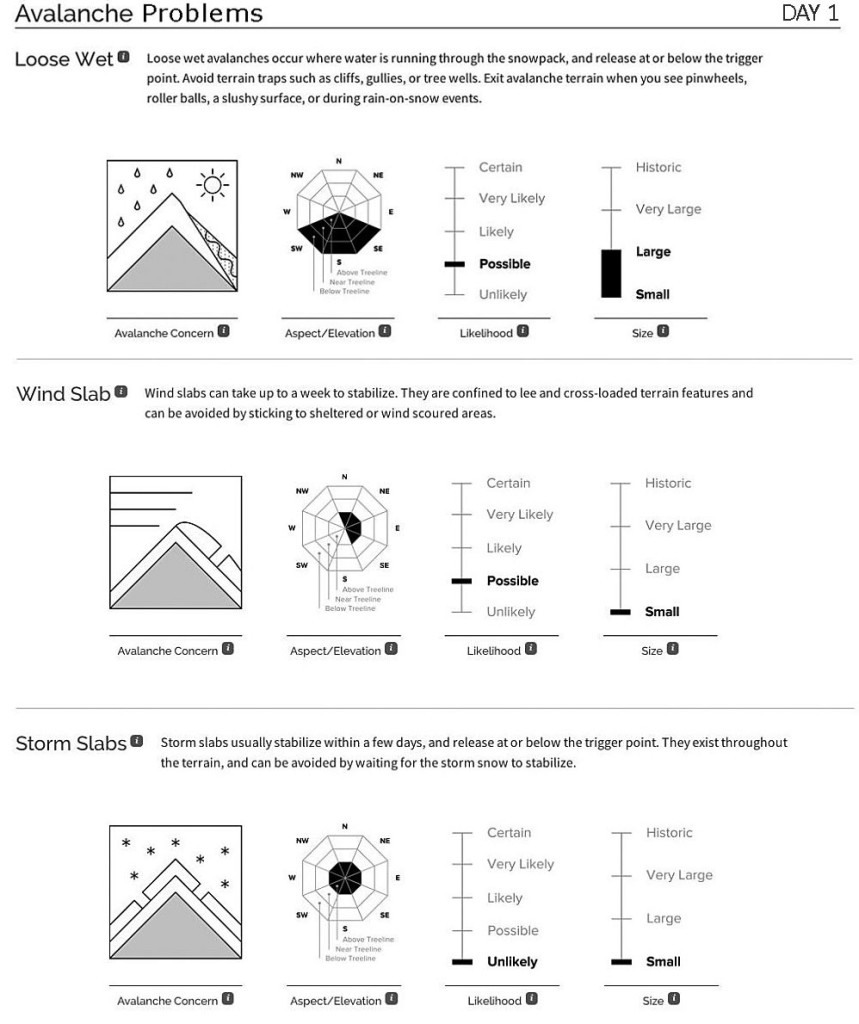 In addition to knowing the type of avalanche, you need to look at the full picture offered by the avalanche forecast and find out what the bulletin highlights as the “avalanche problem.” The problem consists of the avalanche type combined with its location (aspect and elevation), likelihood of triggering and size. The following graphics show the Northwest Avalanche Center’s graphical representation of the avalanche problem (previously called the concern in 2013-14).

For an experienced backcountry skier or rider the Day 1 scenario seems pretty manageable. Avoid the solar aspects, especially late in the day. Watch out for small wind slabs in the alpine, specifically on SE to N facing terrain and small storm slabs in the alpine on all aspects. 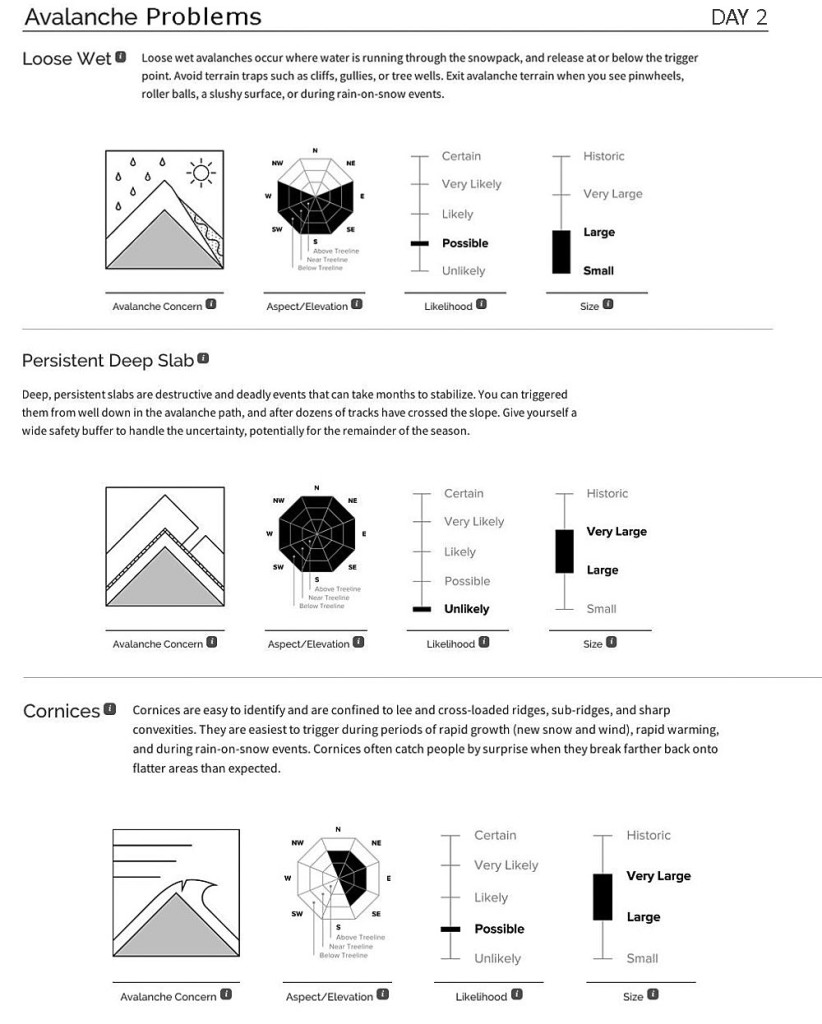 Now, compare the first relatively easy DAY 1 scenario to the DAY 2 information, which had the exact same hazard rating (moderate at all elevations).

This day would be much harder to manage. The biggest concern here is the persistent deep slab. The likelihood of triggering this avalanche is unlikely but the resulting avalanche would be large to very large, so consequences of triggering this avalanche would be huge. In addition, this persistent deep slab is on all aspects and elevations, so avoiding the problem is nearly impossible. The final two nails in the coffin would be the cornice and wet loose problems, both of which could be big enough to trigger the deeper instability problem. This would probably be a good day to avoid all avalanche terrain even though the rating of moderate times three makes it seem relatively benign.

If you have been using the avalanche problem to help with your decision-making and planning great, keep up the good work. If you haven’t, I challenge you to know the problems each and every time you are out in the backcountry (or slackcountry) this winter. Adding the avalanche problem(s) to your checklist will move you one step closer to understanding what’s going on with the snowpack. We will never be able to know everything about the snowpack, and there will always be surprises, but putting in this extra effort will hopefully help you make safer decisions.

Jeff Ward, co-owner of North Cascades Mountain Guides, is a fully certified AMGA and IFMGA licensed Mountain Guide and has been working as a full-time professional mountain guide since 1995.