In the national forest around the volcano near my home, there is a pocket formed by the near-perpendicular intersection of two ridges. There’s a steep, old logging road that winds its way up to the ridgetop above this cleft in the earth, past a small spring that seeps downhill and is gathered by a creek and continues onward. I am grinding my way uphill, past this spring, on my mountain bike. My plan is to explore and swim in a cluster of lakes that lay beyond this ridge, accessed by a mix of old logging roads and singletrack. As I climb the last steep section of road to the top, an old clearcut with four- to seven-foot tall trees comes into view. The cut descends from the ridgetop into the pocket and ends in a rough talus slope abutting ancient lichen-covered Doug firs. I visualize the terrain with my “skier eye,” which serves the dual purposes of distracting me from the burn in my legs and allows me to indulge in my never-ending ski obsession. Such ski season thoughts lurk beneath the surface whenever I see ski-friendly topography, regardless of the season. With enough coverage, the pitch before me could yield a dozen or so lovely turns down into the thick timber below. I add this to my ever-expanding “to-do list.” 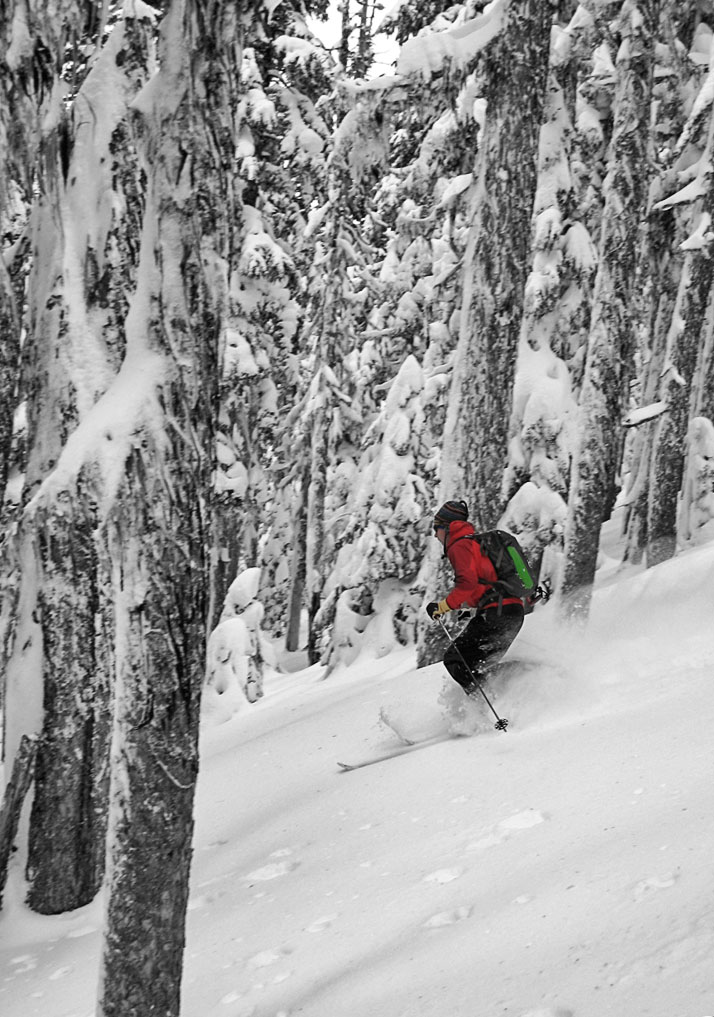 Fast forward to February and my wife and I are skinning out to the aforementioned slope. It snowed eight-plus inches three days ago, but the sun has been out, too. Our hope is that the terrain’s north-facing aspect means it‘s still holding cold snow. I dig the contrast of being back in a familiar zone, traveling by a different mode over this transient, yet landscape-morphing snowpack. We gain the top of the ridge and drop the first pitch, sliding turns down through the anticipated old powder. We traverse left at the talus, pass above the hillside where the summertime spring emerges and drop another 400’ through a second clearcut. The sun is behind me as I descend the second pitch, and I chase my shadow down the cold velvet snow. It’s like watching a silhouette of myself skiing, while skiing. At the bottom, we stop for lunch while snow crystals fall from the trees, sparkling and tinkling in the low angle winter sunlight. A gray jay lands on Laurel’s ski pole planted in the snow next to us. It cocks its head and stares, questioning why two people would skin seven linear miles to ski 800 vertical feet. Once back to the car, my wife pulls her impression of the jay and asks if I think the descent was worth the work of the tour. I think about the snow-covered spring, the velvety turns, the weird shadow-effect and that little bird, and I know the answer.

Two years later, on a July day, I find myself pedaling up the same logging road past the spring en route to the lakes, again. I make a hairpin turn to the right and note the broad flat spot on the outer curve of the road offering a grand view of our local glacier-covered volcano. I think this could be a nice camping spot and recall the August full moon pending arrival in three weeks time. Thoughts of pagan observances fill my head as I bear down and keep climbing.

Three weeks later, in early evening on a perfectly clear, warm day, I stand at the broad flat curve with six good friends and a collection of stringed instruments, drums and beer. We face away from the spring, with a huge faceful of mountain. We sing and play music for eight hours while the sky passes through every shade in the rainbow before settling on a deep purple hue that is backlit by the stars. The moon finally rises above the ridge behind us and shines so brightly that one can wander away from camp with clear sight of the road and path. The mountain spends the end of the day glowing, in succession, in sun-, star- and moonlight. We gaze at our favorite winter ski lines on the volcano across the river. We howl at the moon, the trees, the mountain, the ski lines. We play music for everything we see and laugh at the sublimity of the evening.

A year passes and I’m once again pedaling uphill past the pocket-spring. A tough ski season with consistently high freezing levels left my little north facing stash unskied last season. No matter, I’ll ski the pocket slope this winter and until that time satisfy my itch to return with a summer bike ride. Besides, someone needs to go swim in those lakes. I’ve also convinced myself that it is imperative that I do some recon to ensure that storm-felled trees are not blocking access to the flat spot in the road curve. There is a full September moon in a few weeks that deserves celebratory recognition from a music-fueled bacchanalia. I settle into the uphill grind and let my mind wander…

Ten thousand flowers in spring, the moon in autumn,
a cool breeze in summer, snow in winter.
If your mind isn’t clouded by unnecessary things,
this is the best season of your life.

I think about how the intersection of place and season is constantly changing, but repeats itself annually.

I think about the rhythms of my own life and how I keep returning to some sort of center.

I think maybe I think too much.

I relax in the saddle, admire the view and keep pedaling – thoughts of skiing in my head.