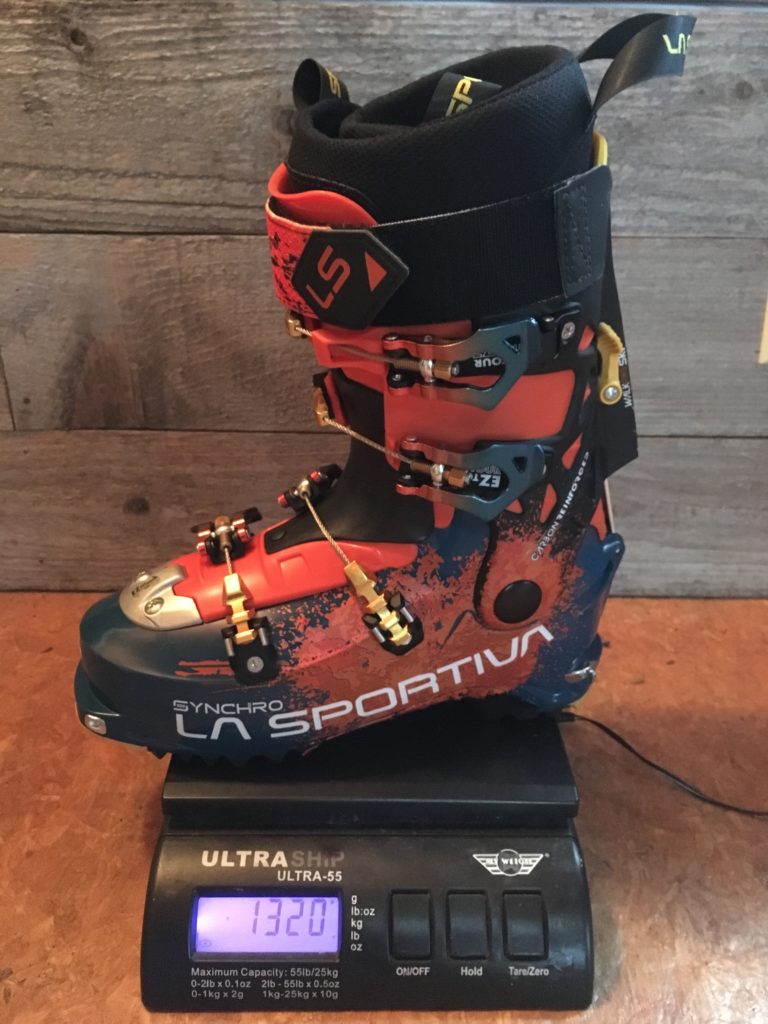 It’s no secret that we spend more time climbing uphill than we do skiing down when backcountry skiing. Nonetheless, downhill performance remains high on the AT ski boot requirement list for most backcountry skiers. As a result, our boots need to walk the line between being lightweight and uphill-friendly while maintaining the ability to deliver performance when called upon to ski down. La Sportiva hit a sweet spot a few seasons back with their Spectre AT Ski Boots. The Spectre – and now Spectre 2.0 – offer remarkable uphill/walking comfort and solid downhill performance – all in the sub 3kg/pair (weight varies by size) category. Well, in an effort to take the downhill performance to a higher level, La Sportiva looked at the Spectre and how it holds up under the pressures of skiing. The result is the La Sportiva Synchro AT Ski Boot. The Synchro is based on the same design as the popular Spectre AT boot but adds a new level of stiffness thanks to a new two-piece tongue, an overlap liner and engineered changes to help stiffen the boot shell.

La Sportiva Synchro vs. the Spectre 2.0 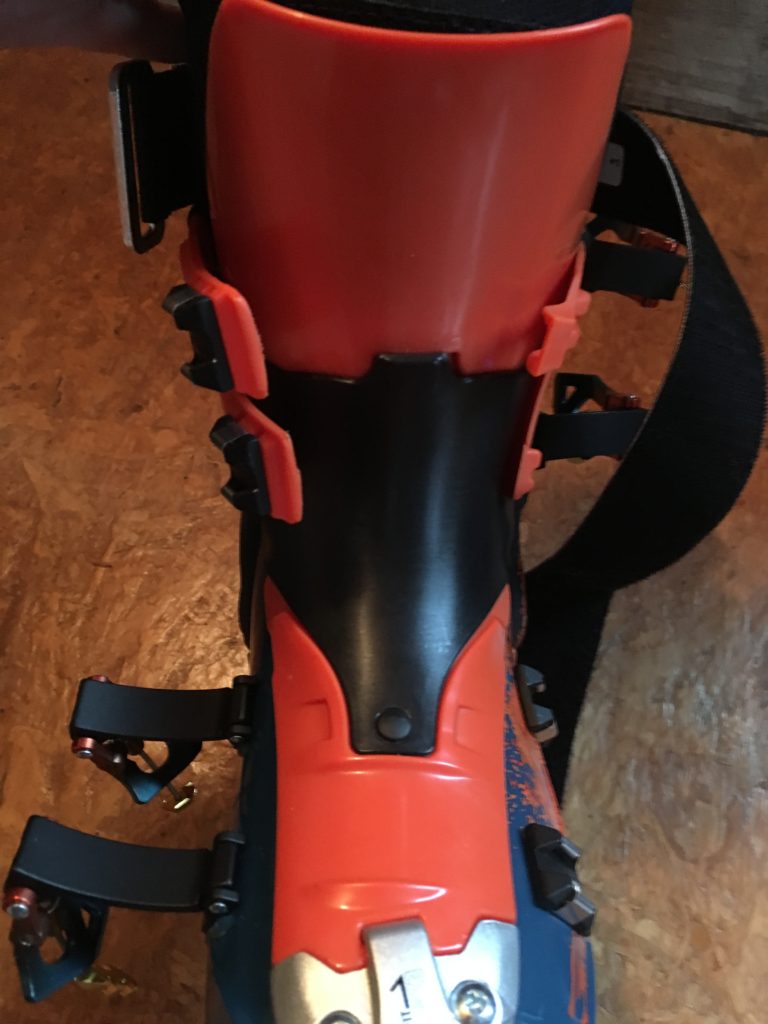 The Synchro tongue features a stiffener (black) adding to the boots increased stiffness.

At first look, the Spectre and Synchro boots appear to be quite similar. And from a fit and volume perspective, they are. The shell mold is identical from a fit perspective – both are spec’d at 102.5 mm last width. However, with one model on each foot, the new Synchro AT ski boot is noticeably stiffer in ski mode than the Spectre. Both boots feature a mix of Grilamid (shell), Pebax (cuff) and carbon reinforcement, but upon closer inspection, the Synchro is engineered with added material in a few key places and features a new two-piece tongue. These small changes add up to a decent increase in stiffness. For what it’s worth, La Sportiva gives the new Synchro AT ski boot a 125 flex rating, while the Spectre 2.0 measures in with a 115 flex rating. If simply used to compare within the the two boots (presumably Sportiva used the same measurement standards for both), the flex numbers show that the Synchro is 8% stiffer than the Spectre. It might not sound like much, but it feels different for sure. And Sportiva achieved the stiffer flex without adding significant weight; Our demo Synchro weighs in at 1320 g (size 25) – a mere 40 grams more than the same size Spectre.

Now, before I go singing the praises of stiffer = better, it should be said that stiffer is not necessarily better. One of the remarkable qualities of the Spectre AT ski boot is its progressive flex – this refers to how the flex modulates as you push against the boot. Such progressive flex feels natural and responds well to the dynamic demands of skiing. The opposite would be a boot that only flexes under extreme pressure. In other words, progressive flex is good – especially for ski touring and powder skiing. I have been on the Spectre for multiple seasons and it rarely (if ever) leaves me wanting for more power. But I am lightweight relative to many skiers. Heavier skiers and those with an affinity for the power of stiffer alpine boots will welcome the stouter flex of the Synchro – and La Sportiva offers the extra power with very little weight penalty and only modest differences in walk-mode range.

What’s New and Different in the Synchro 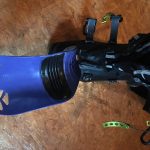 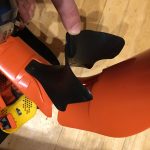 Beyond the added stiffness of the new Synchro boot, there are a handful of small changes.  There are the aforementioned new two-piece tongue and overlap liner design, which together definitely add to the boots stiffer feel. The tongue drops the bellows hinge of the Spectre (a weak point in the Spectre) and adds a stiffener component (the black piece in the pic). The new tongue, combined with the wrap liner, tighten up the flex and walk mode of the Synchro. Sportiva specs the Synchro ski boot walk mode at 50 degrees, while the Spectre is shows 60 degrees. While a 10-degree range loss is notable, the exact range of either boot is somewhat dictated by how tight or lose one runs the cuff buckles when in tour mode. The reality is that the Synchro still offers a good range of motion, albeit not quite as free as the Spectre, which I would rate as one of the best walk modes for a boot of its caliber. 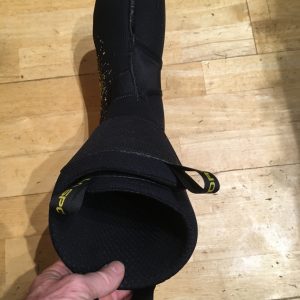 The new liner looks and feels to be a step up in quality from the Spectre liner, too. It’s reminiscent of an intuition liner and features some added stiffener material in the upper cuff. It has proven to be quite warm and comfortable.

How does the Synchro ski?

The added stiffness of the Synchro over the Spectre is noticeable while skiing. Power transfer is fast and controlled. A lot of the difference really feels like it comes from the added rigidity that the tongue provides. The uphill performance is also effected by the tongue as it limits the forward range of the boot in walk mode when compared to the Spectre walk mode. The synchro is on par with other boots in its class of downhill performance for walk mode range. It would be interesting to experiment with swapping tongues between the Spectre and the Synchro to see how it impacts stiffness and walk mode.

Which boot is for you – Spectre 2.0 or Synchro?

While there is no definitive answer to the Synchro versus Spectre AT ski boot question for every skier, it’s safe to generalize that bigger skiers and those in search of stout AT ski boots, while still maintaining a good tour-friendly feel will find the Synchro to be the answer. The La Sportiva Synchro delivers a remarkable balance between downhill power and walk-friendly design. Sure, you can find a stouter AT ski boot. And you can find a lighter, easier walking AT ski boot. But few AT boots offer the balance of both like the La Sportiva Synchro boot. MSRP $759

Check prices and availability on the La Sportiva Synchro  or  the Spectre 2.0. Buy direct from Sportiva and support Off-Piste Mag