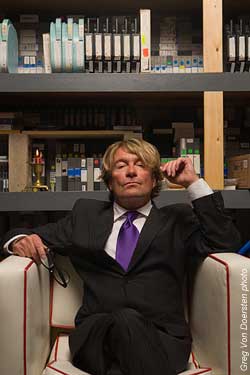 If you are old enough to have been watching ski movies in the 80’s and 90’s, you are sure to recognize the name Greg Stump. If you’re not familiar with Stump’s films, do yourself a favor and add a few to your annual ski party viewing list this year. He produced a number of ski films during the rise of “extreme skiing,” perhaps the most highly regarded being his 1988 film, Blizzard of Aahhhs. Featuring names like Plake, Hattrup and Schmidt, Blizzard set a new tone for ski films and, for that matter, for skiing.

Having won film awards and earned himself the Lifetime Achievement Award from International Ski History Association, Stump has been out of the ski film world since the late 90’s, but this fall marks his return and the launch of what he’s saying is his final ski film, Legend of Aahhhs.

As the name implies, the film is a retrospective look at Blizzard of Aahhhs and the history of the ski film genre. Stump’s semi-autobiographical approach includes a serious dose of vintage footage and classic Blizzard moments. Discussions with influential athletes including Hattrup, Plake and Schmidt plus conversations with Warren Miller and other ski filmmakers help frame Stump’s influences and ski films as we know them today. It’s a must see for any dedicated skier.

Stump is currently on tour with the film and will be near us in Portland, OR on Nov 8 and 9. You can get the full tour schedule and find out when the film will be in your hood at www.legendofaahhhsmovie.com. I had the opportunity to ask Stump a few questions about the new film and life:

Off-Piste Mag: You’ve been out of the ski film loop for a few years. What prompted the return and the subsequent production of Legend of Aahhhs?

Greg Stump: It was a story that needed to be told, so I dove in.

OP: I feel like I first heard rumor of the new film a few years ago, and it’s great to see the perspective behind Blizzard of Aahhhs and hear from the athletes today. Was that the plan from the outset or did it take time for the project to gel?

GS: Well, between finding the funding and doing all the research and then building the edit it was time consuming.  The edit was very difficult as every door you opened offered another ten doors… then behind each new door there were another ten.

OP: I really enjoyed the vintage footage and modern discussion with Plake, Schmidt and Hattrup reflecting on the process. Did you consider getting the crew back together on snow for shooting?

GS: No. Getting all those cats together is like cat wrangling… I can get Willie Nelson on the phone easier than Glen Plake.

OP: Having made such an impact on the ski film genre, where did the experience lead you professionally?

GS: It got me into Hollywood making commercials and music documentaries.  I directed and edited Tony Hawks’ 2001 Super Bowl commercial for Disney, music videos for Seal, Willie Nelson, Art of Noise and Dinosaur Jr.  But none of it had my name on it, so the ski movie crowd thought I disappeared.

OP: Having influenced the ski film genre, what do you think of today’s films from the big boys at TGR to the up-and-coming crews from Sweetgrass and Sherpa Cinema? Do you watch ski films anymore?

GS: I love the athleticism and the cinema work… simply stunning.

OP: Did you get Warren Miller to watch the original Blizzard movie? What did he think?

OP: There’s some great old footage in Legend, including shots of you at the dawn of the freestyle era. When’s the last time you showed off your ski ballet moves?

GS: Every morning in the shower…

View the trailer for Legend of Aahhhs