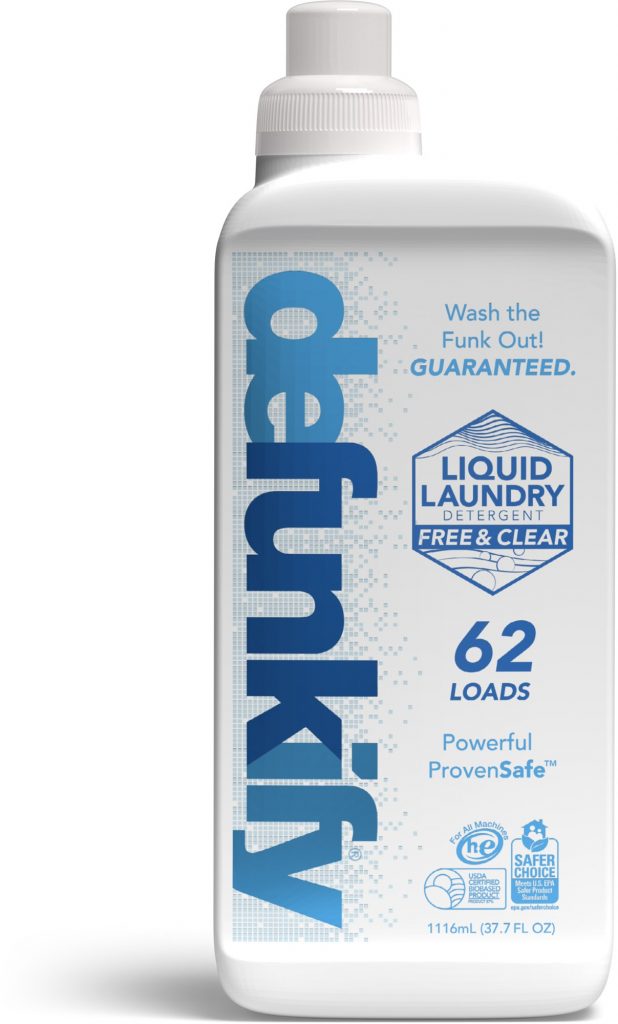 You know the drill. Pull a shirt out of your bag, drawer or off the pile on the floor, and see if it passes the sniff test to wear another day. It seems like the older the layer, the lower the chance it will pass the test. Nothing develops it’s own special funk quite like synthetic baselayers. It doesn’t matter whether you’re a runner, cyclist, climber or backcountry skier. We’ve all got baselayers that, even when freshly washed let alone after a wear or two, are hard pressed to pass the sniff test. They’ve just seen too many sweaty days in the field. We’ve been testing out laundry detergent called Defunkify that promises to address the funk factor of baselayers. Defunkify detergent is an enzyme-based detergent that claims to remove odor-causing bacteria down to the microscopic level.

I’ve been putting Defunkify to the test for a couple of months on a variety of layers from heavily-used cycling kit to my go-to base tops for hiking and running. Without belaboring the point, let’s just say there’s no shortage of shirts in my life that, despite being fresh out of the laundary, seem to smell just like they did the last time I wore them.

I am happy to report – as are my ski partners – that Defunkify works. The Defunkify Active Wash Detergent replaces your normal laundary soap and is super simple to use. Just a 1/2 to full cap full of liquid per load just like it was your regular detergent.

Defunkify is also environmentally sound. It features “Green Science” as the company calls it, and does not rely on a toxic blend of chemicals or perfumes. Defunkify works by using enzymes to break down odor-causing bacteria rather than by masking odor with perfumes or soap residue.

The company suggests keeping laundry loads small and using warm or hot water for best results. I’ve been doing exclusive baselayer loads – socks, shirts, underwear, etc., so as not to dilute the process on a bunch of jeans or hoodies. The results are noticeable and good. Shirts smell clean and stay smelling clean until they’ve been put through a full day or two of wear – when you would expect them to be funky. For truly stubborn funk, you need to soak the items in a solution of Defunkify before washing. Soaking gives the enzymes extra time to work on the odor-causing bacteria.

With regular laundry soap, it’s far too common that a freshly washed layer smells ok when first pulled on, but within minutes of breaking a sweat smells just like it did at the end of the last day it was worn. Defunkify addresses this phenomena. That’s not to say that my stuff never stinks, but at least it stays reasonable through a day or two of use when washed with Defunkify. According to Defunkify, the enzymes in their laundry detergent actually remove the bacteria food source all the way down to the microscopic level and leave zero detergent residue behind. For expeditions and longer trips where laundry is not an option, Defunkify makes a laundry addative called Active Shield Booster that works to keep layers from developing stink blooming bacteria between washes.

Ski season is nearly upon us – renew your baselayers for another season or two with Defunkify. Your nose and ski partners will thank you. You can read more about the science and environmetal rating at defunkify.com, and you can support offpistemag.com when you purchase Defunkify at REI

Using our product links and banners helps keep the content coming at offpistemag.com