Skiers and weather forecasters talk a lot about El Niño and La Niña when gazing into their crystal balls in search of the winter snow forecast. And for good reason, El Niño (warm Equatorial Pacific sea surface temperatures) and La Niña (cool Equatorial Pacific sea surface temperatures), or ENSO as the collective phenomena is known, can have a noticeable influence on snowpacks around North America.

But ENSO is not the only climatological phenomena that forecasters follow. Here in the Pacific Northwest, a smaller and lesser-known cycle called the Pacific Decadal Oscillation or PDO is also considered to reflect certain weather patterns. And in a year when the weather professionals are starting to say that we are looking at ENSO neutral conditions or La Nada (near average Equatorial Pacific sea surface temperatures), it’s a good time to see what the PDO is doing.

ENSO and the PDO 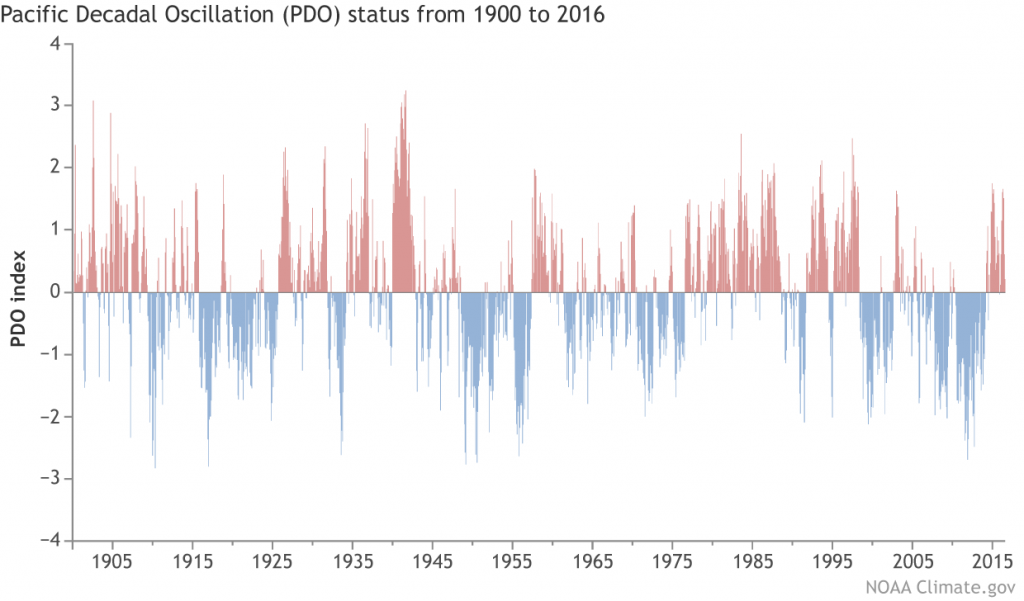 First identified in the late 1990s by then University of Washington professor of climatology, Nathan Mantua, the PDO is the measurement of significant year-round patterns in monthly sea surface temperatures across the North Pacific.

Similar to ENSO, the PDO has two states – warm and cold. Is the PDO like a regional ENSO you ask? Of course, it’s not quite that simple. Climate.gov offers a nice description; “Unlike ENSO, the PDO isn’t one climate phenomenon. What we call the PDO is instead an aggregation of mostly independent processes. If ENSO is an ice cream flavor, the PDO is climate Neapolitan — a combo of different individual processes which influence a broader area.”

Climate.gov goes on to explain that, “ … the PDO is not a well-oiled machine like ENSO; it’s the ocean surface temperature’s aggregated response to all sorts of atmospheric and oceanic processes. For the most part, the atmosphere is what changes the temperature pattern across the North Pacific Ocean, not the other way around. The PDO is therefore a response, not an agent of change itself.”

The PDO has been predominately positive (above average sea surface temps in the North Pacific) for the last few years. According to the Climate Prediction Center’s most recent report (Sept 9, 2016), the PDO appears to be swinging into negative or cooler than average territory as of August 2016 (read report).

Does this mean a mini La Niña that forebodes copious snowfalls in Oregon, Washington, British Columbia and neighboring mountains? Unfortunately, that’s over simplifying the scene. Again, to quote Climate.gov; “Since the PDO largely represents an ocean response to the atmosphere, you have to be careful in saying that the PDO actually causes any big change in the atmospheric circulation. It can have an influence locally, though. If you live adjacent to the west coast, a positive PDO can lead to local impacts to weather and climate through the direct effects of warmer-than-average ocean waters.”

The Low Cost of Optimism

So, as an eternal optimist, I read this to suggest that a negative PDO – our current state – could impact our winter through the effects of colder-than-average ocean waters, which I interpret to mean (like La Niña) influencing the potential for colder air temps and higher than average precipitation numbers.

Does the science follow suit to support my optimism for a big winter snow forecast? Unfortunately, there is no perfect correlation between the PDO, or ENSO for that matter, and winter snowpacks. According to OpenSnow.com in reference to six recent seasons with a negative PDO. “The western US saw great snowfall during 3 seasons with the other seasons netting out to average (with some regions getting heavy snowfall and some getting below average snowfall). In the northeast, 3 seasons were below average, 2 were near or just above average, and 1 was stellar.” Hmm, that’s about as clear as mud. It’s classic long-term weather forecasting, really. It could mean big snow, but then again it might not. Profound, eh?

As a result of a less than definitive mandate from the science, it’s time to talk about the low cost of optimism. Optimism is free. And it’s scientifically proven to spread excitement. As the old sports analogy goes, the best defense is a good offense. So being optimistic about the coming winter is like never letting the defense control the match. Cut off the doubters and just start dreaming of a great winter. Drop a few terms like PDO and ENSO and dream big. There’s really no downside to dreaming of a good winter snow forecast. The best-case scenario is that you are the hero for spreading optimism and we all have great skiing, all winter long. The worst-case scenario is that the weather is what it is, and we all ski when we can and enjoy it when it’s good.

or you can support offpistemag by getting your must-have gear from one of the following purveyors of backcountry ski equipment. OMC, Backcountry, EVO or even REI.