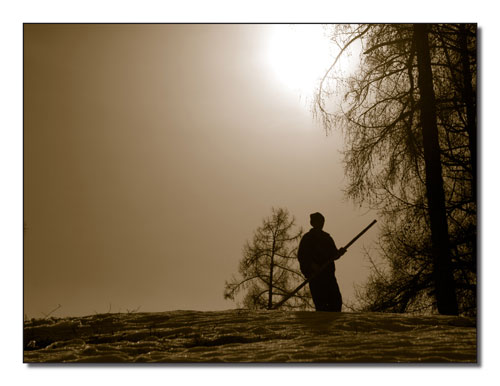 Back in 2005, I was able to join Nils Larsen on his first trip to the Altai Mountains in Northern China to meet and begin documenting what is believed to be one of the last remaining cultures to rely on primitively made skis for travel and hunting.

The skiers of the Altai Mountains represent the roots of skiing. Their skis are handmade from local spruce trees and literally look ancient. Traveling to the Altai was a trip of a life time for me. Nils has subsequently been able to return five more times to continue his documentation of the Altai ski culture.

Following his first few trips, Nils produced the film Skiing in the Shadow of Genghis Khan: Timeless Skiers of the Altai about his first several trips. He also has a blog with some of his journal entries from his travels, including his January 2010 trip.

Nils has also been working on developing a new ski company inspired by the utilitarian nature of the skis used in the Altai Mountains. Appropriately called  the Altai Ski Company, the new skis are geared toward a unique blend of do-it-all utility that speaks to the way skis are used in the Altai Mountains. We are not talking descent oriented backcountry or mountaineering skis like we normally feature, rather the Altai Ski company skis are short skis with permanent skins that enable a blend of walking and sliding.

I have actually been able to use the skis a few times as Nils has been working on the design. I have skied them with 3-pin bindings and plastic 2-buckle tele boots. They are a lot of fun. We have found one of the best ways to ski them is to use the single pole style of the Altai skiers

Check out these vid clips: