Last year, we ran a piece offering six backcountry skier personalities that garnered a bunch of mail. The personalities included: the Gearhead, Jaded Local, Luddite, Bro Brah, Rando Racer and Newby. More than likely, we all hold traits from a variety of the stereotypes, but in the spirit of making fun of ourselves, here’s a look at the first three: Gearhead, Jaded Local and Luddite. 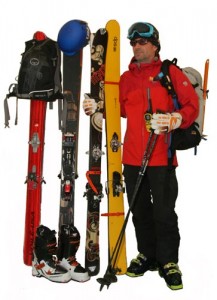 THE GEAR HEAD
The common Gear Head is a gregarious creature that thrives in urban and mountain environments alike but is, perhaps, most easily identifiable in his preferred habitat, the garage or man-cave, surrounded by his sizable collection of equipment, new and old. In the backcountry, Gear Heads are easily recognizable by the colorful plumage of the latest Gore-Tex outerwear in which they are clad and the number of accouterments dangling from their packs. A true Gear Head thinks nothing of adding to his ski, jacket or pack quiver on an annual basis or throwing three pairs of skis into the roof box for a day of skiing only to drone on about which pair is most appropriate for the day’s snow conditions. Despite his affinity for new equipment, the Gear Head is equally likely to hold dear the occasional piece of old equipment – a favorite hat, a particularly “great” pair of ski poles or a discontinued soft-shell jacket that was simply the “best ever.”  When asked about equipment, and even when his opinion is not solicited, the Gear Head is well known to rattle on about ski dimensions, rocker profiles, outerwear breathability ratings and boot weights. The Gear Head prefers his beer hoppy and his coffee strong. When not consumed with talking about ski gear, he is prone to discussing coffee roasts or perhaps the latest seasonal brew from his current brewery of choice. Although not generally considered dangerous, Gear Heads are infamous for spending more time talking about ski gear than actually skiing.

THE JADED LOCAL
The Jaded Local is an anti-social creature unless you happen to be part of his inner circle or, perhaps, an attractive member of the opposite sex, in which case, he’s more apt to showcase his charm. Although far from rare or endangered, he can be difficult to spot in the backcountry as he travels in small, tight-knit groups and rarely features the latest trend in brightly colored outerwear. Though commonly found in mountain communities throughout the world, the 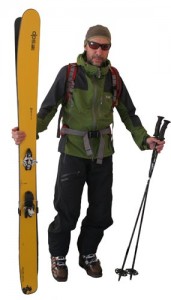 Jaded Local is not known to travel much; he’s local for a reason. He tends to stay put in his home mountains where he prefers the path less traveled. High elevation and low population is his motto. When not deep in the backcountry away from resort boundaries and roadside attractions in search of the next secret stash, the Jaded Local can be found warming his favorite bar stool, drinking whatever is on special and ranting about the way it used to be “back in the day.” He is best left to ski amongst his own kind, though his knowledge of the local terrain and snowpack is often encyclopedic and the envy of any skier considering encroaching on his habitat. Uptrack chitchat with Jaded Local is minimal at best – unless he catches wind of tourists (any stranger in his mind) in his hood and gets back to ranting about how it used to be. If you happen to meet him at the edge of his preferred watering hole and quietly offer to buy him a couple of rounds, it’s possible he might share some beta but beware of the high potential for a sandbag.

THE LUDDITE
Similar to the Jaded Local in his affinity for the high alpine environment and small groups, the Luddite is a unique species that’s known to associate with the Jaded Local on occasion. He is, however, less discerning about his habitat and is just as likely to be spotted enjoying a roadside attraction when it’s in good form as he is to be spotted in his own secret stash. He’s also more apt to be friendly with a newcomer. A telling sign of a fully matured Luddite is

his vintage ski equipment – the older and simpler in its design, the better. His Tua Excaliburs were cutting edge in 1994 and, “by golly, they still ski great today!” More specifically, many a Luddite prefers the finesse of the freeheel to the leverage of the locked heel, and he’ll happily bend your ear about why. The Luddite is easily identified from a distance by the nature of his tight and numerous turns on descent. He earns his turns and he is not about to waste them slashing wide arcs (not to mention, his skis are not designed for wide arcs); the Luddite is all about laying as many turns as possible. His après ski drink of choice is a well-aged single-malt scotch, heavy on the peat. Uptrack conversation tends to revolve around politics or the latest random in-depth story he’s just heard on NPR. He is also well known to prefer all-natural fibers and earth tone colors versus brightly colored petroleum-based synthetic materials. Generally speaking, the Luddite is an easygoing creature of habit who is only a danger to the gear companies for his penurious ways.

Land of No Use
Quality Ski Footage