Backcountry skiers can be a curious bunch. We come in a variety of flavors and there are several easy stereotypes to poke fun at. Of course, we all hold traits from multiple stereotypes, but in the spirit of making fun of ourselves, we offer Backcountry Skier Personalities part II – read part I here

THE BRO BRAH
Few skiers are as easy to identify as the quintessential Bro Brah. The Bro Brah is part ski bum, part pro skier wannabe, and you needn’t look far from the resort boundary to find him in his preferred slackcountry habitat. His turns are few and far between – favoring big radius arcs and rowdy straightline signatures in the snow. Look for clothing emblazoned with company logos, flat-brimmed trucker hats and tall knit toques. Bro Brahs tend to sport the latest and greatest clothing and equipment, not to mention drive high-profile vehicles – often emblazoned with the same company logos found on their clothing. Perhaps the most common Bro Brah sighting is après ski, clustered in small groups around the aforementioned high-profile vehicles in a resort parking lot or backcountry trailhead drinking canned beer and using single syllabic words to communicate. The Bro Brah is potentially dangerous to himself and others depending on the balance of energy drinks and alcohol consumed. Approach with caution and never ski alone with more than one Bro Brah. If f-bombs could reduce avalanche hazard, the Bro Brah would be a walking avalanche mitigator.

THE RANDO RACER
Competitive athlete meets backcountry skier yields the unique Rando Racer species. This growing sub-specie of backcountry skier is easily spotted in the early morning hours ascending the groomed slopes of your local ski resort. Unless participating in a competitive event, Rando Racers are solitary creatures – sort of like cats, they tolerate one another but prefer to function independently. Fully matured Rando Racers are not afraid to wear spandex, but aspiring Randos often sport more softshell than spandex. A good indicator that the skier ahead of you on the skin track is a Rando Racer is his fast pace and the narrow track set by his ultra-light, skinny carbon fiber skis. They do not always leave the most beautiful ski tracks behind on descent, but they are likely to be the first ones to the top of a given climb. Rando Racers are most easily observed during uphill race events but are also commonly sighted making laps on roadside attractions and closed ski resorts. Domesticate a Rando Racer with beta on connecting backcountry ridgelines and you’ll get him to brake trail for you. 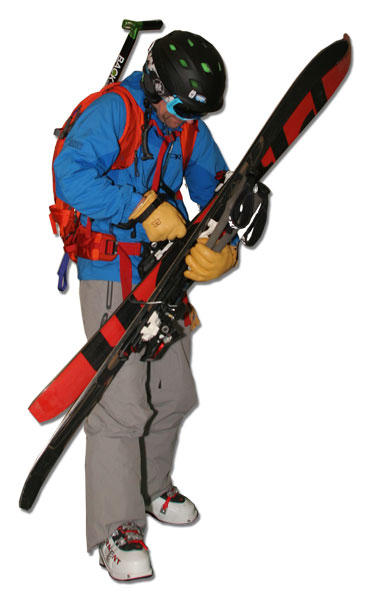 THE NEWBY
You needn’t search far afield for the Newby. This species is ubiquitous around North America and commonly sighted at sidecountry locations and roadside attractions made popular by their easy access and moderate terrain. A Newbie is identifiable by the glint of his spanky new gear and the still waterproof nature of his outerwear. Newbies often travel in small groups with a self-appointed leader calling the shots. Like a well-rested puppy, the Newby has a remarkable appetite for stumbling over himself in the mountain environment all while exuding an enviable enthusiasm for any given adventure, regardless of how tame or unlikely it may appear to a more experienced skier. Newbies are generally friendly and appreciate the company of others except when intimidated by a high-profile species like the Jaded Local or Bro Brah. When not skiing, they can be observed interacting on popular Internet forums discussing the merits of the latest gear, hunting for used ski bargains or looking for ski partners. Although generally harmless, it is best not to follow a Newbie unless you have a solid knowledge of the terrain and a good sense of the local snowpack.